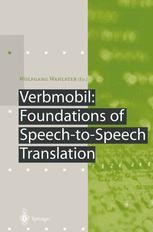 Verbmobil is the result of eight years of intensive research in a large speech-to-speech translation project, executed by a consortium comprising nineteen academic and four industrial partners. The system that was developed by more than 100 researchers and engineers handles dialogs in three business-oriented domains, with translation between three languages: German, English, and Japanese. Verbmobil deals with spontaneous speech, which includes realistic repair phenomena, and uses deep semantic analysis to recognize a speaker's slips and to translate what he tried to say rather than what he actually said.
After more than 400 single publications, this book gives the first comprehensive overview of the results of this unique and seminal project in human language technology. The theoretical and practical foundations from signal processing to language understanding are described in detail. The system anatomy is presented and the components for multilingual and robust speech processing, prosodic analysis, parsing, semantic analysis, discourse understanding, translation, generation and speech synthesis are discussed.
Contributions by leading scientists in speech and language technology look at the component technologies that make Verbmobil the most advanced speech-to-speech translation system worldwide and a landmark project in the history of natural language processing.

Prof. Dr. Dr. h.c. mult. Wolfgang Wahlster is the Director and CEO of the German Research Center for Artificial Intelligence (DFKI GmbH) and a Professor of Computer Science at the Universität des Saarlandes, Saarbrücken. In 2000, he was coopted as a Professor of Computational Linguistics at the same university. In addition, he is the Head of the Intelligent User Interfaces Lab at DFKI.

He was awarded the Deutscher Zukunftspreis (German Future Award) in 2001 and he received the Federal Cross of Merit, First Class, the Officer's Cross of the Order of Merit of the Federal Republic of Germany in 2006.

He is the Chief Academic Advisor for Information and Communication Technologies (ICT) in the Research Union of the German Government, he is a member or chair of many key international scientific advisory and governance boards, including the National Institute of Informatics (NII) of Japan, the jury for the European ICT Prize of the European Commission, the Singapore Agency for Science, Technology and Research, the SAP Next Business & Technology Advisory Board, the Center for Advanced Security Research in Darmstadt, the Intel Visual Computing Institute, the Fondazione Bruno Kessler, and the Future Internet Public-Private Partnership of the European Commission.

He has chaired and given invited talks at the key international conferences in computational linguistics and artificial intelligence, he is a board member of the key AI journals, and he is a Fellow of the Association for the Advancement of Artificial Intelligence (AAAI), the European Coordinating Committee for Artificial Intelligence (ECCAI), and the Gesellschaft für Informatik (GI).