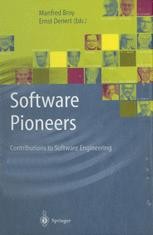 A lucid statement of the philosophy of modular programming can be found in a 1970 textbook on the design of system programs by Gouthier and Pont [1, l Cfl0. 23], which we quote below: A well-defined segmentation of the project effort ensures system modularity. Each task fonos a separate, distinct program module. At implementation time each module and its inputs and outputs are well-defined, there is no confusion in the intended interface with other system modules. At checkout time the in­ tegrity of the module is tested independently; there are few sche­ duling problems in synchronizing the completion of several tasks before checkout can begin. Finally, the system is maintained in modular fashion; system errors and deficiencies can be traced to specific system modules, thus limiting the scope of detailed error searching. Usually nothing is said about the criteria to be used in dividing the system into modules. This paper will discuss that issue and, by means of examples, suggest some criteria which can be used in decomposing a system into modules. A Brief Status Report The major advancement in the area of modular programming has been the development of coding techniques and assemblers which (1) allow one modu1e to be written with little knowledge of the code in another module, and (2) alJow modules to be reas­ sembled and replaced without reassembly of the whole system.

"Software Pioneers documents the proceedings of a celebration of software engineering held in Bonn, Germany, in June 2001. … As a celebration of software engineering the book works well. It is fairly priced, and the contributions are mostly original, readable and insightful. It is beautifully produced on blued paper, lending a uniformity to the varied typefaces of the facsimile reproductions of historical documents." (Martin Campbell-Kelly, Times Higher Education Supplement, February, 2003)

"This book, coming with four DVDs, presents epochal works of 16 of the most influential software pioneers. … The volume editors coherently integrated the historical contributions with current aspects and future perspectives. … Together, the book and the four DVDs constitute a unique and major contribution to the history of software engineering." (www.amazon.de, December, 2002)

“This book is based on a conference that took place in 2001 … . The speakers at the event … included many of the most legendary names in the history of software development who were asked to reflect on their own pioneering contributions to software engineering in the 20th century. … each of them address the conference with the added benefit of being able to re-read their lectures. This is a ‘must have’ resource for anyone … interested in the history of computing.” (Sue Gee, I Programmer, February, 2009)