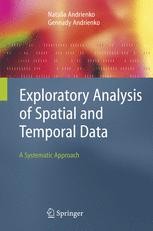 Exploratory data analysis (EDA) is about detecting and describing patterns, trends, and relations in data, motivated by certain purposes of investigation. As something relevant is detected in data, new questions arise, causing specific parts to be viewed in more detail. So EDA has a significant appeal: it involves hypothesis generation rather than mere hypothesis testing.

The authors describe in detail and systemize approaches, techniques, and methods for exploring spatial and temporal data in particular. They start by developing a general view of data structures and characteristics and then build on top of this a general task typology, distinguishing between elementary and synoptic tasks. This typology is then applied to the description of existing approaches and technologies, resulting not just in recommendations for choosing methods but in a set of generic procedures for data exploration.

Professionals practicing analysis will profit from tested solutions – illustrated in many examples – for reuse in the catalogue of techniques presented. Students and researchers will appreciate the detailed description and classification of exploration techniques, which are not limited to spatial data only. In addition, the general principles and approaches described will be useful for designers of new methods for EDA.

Dr. Natalia Andrienko and Dr. Gennady Andrienko are research and technology managers of the SPADE team. They received their Master degrees in Computer Science from the Kiev State University in 1985 and 1986, respectively, and Ph.D. equivalents in Computer Science from Moscow State University in 1992 and 1993, respectively. They worked on knowledge-based systems research at the Mathematics Institute of the Moldavian Academy of Sciences (Kishinev, Moldova), then at the Institute on Mathematical Problems of Biology of the Russian Academy of Sciences (Pushchino Research Center, Russia). Since 1997, Drs. Andrienko have research positions at GMD (since 2001 united with the Fraunhofer Gesellschaft). They have been instrumental in numerous international R&D projects, including EU-funded projects CommonGIS, SPIN!, and GIMMI. They are authors of more than 100 refereed papers that have been published in international journals, books, and conference proceedings. They are active members of two commissions of the International Cartographic Association: Commission on Visualization and Virtual Reality and Commission on Maps and the Internet. Their research interests and experiences are:

Dr. Hans Voss is general manager of the SPADE team. He received his Diploma in Computer Science from Bonn University in 1981, and his Research Doctorate in Computer Science from University of Kaiserslautern in 1986. Since 1986 he is working at GMD (now Fraunhofer Institute AIS), Sankt Augustin, Germany. He was head of projects on real-time expert systems, on the product development of an expert system workbench Babylon, and on knowledge engineering in the context of diagnostic expert systems. From 1992 until 1998 he was head of the research area on Cooperative Design (about twenty researchers). He was coordinator of the EU-funded projects GeoMed-F and CommonGIS. In 1997, he co-founded the GMD spin-off company Dialogis GmbH, and acted as co-director during the first two years of its functioning. He is particularly interested in the integration of various technologies in order to support cooperative/competitive spatio-temporal planning and decision-making.

"This book has the potential to become the authoritative reference on exploratory data analysis."
Ian Bishop, Director of the Centre for Geographic Information Systems and Modelling, University of Melbourne, Australia