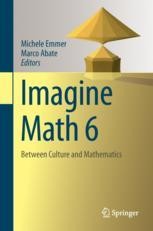 Between Culture and Mathematics

This sixth volume in the series begins with a homage to the architect Zaha Hadid, who died on March 31st, 2016, a few weeks before the opening of a large exhibition of  her works in Palazzo Franchetti in Venice, where all the Mathematics and Culture conferences have taken place in the last years. A large section of the book is dedicated to literature, narrative and mathematics including a contribution from Simon Singh. It discusses the role of media in mathematics, including museums of science, journals and movies. Mathematics and applications, including blood circulation and preventing crimes using earthquakes, is also addressed, while a section on mathematics and art examines the role of math in design. A large selection presents photos of mathematicians and mathematical objects by Vincent Moncorge.

Discussing all topics in a way that is rigorous but captivating, detailed but full of evocations, it offers an all-embracing look at the world of mathematics and culture.

Michele Emmer is a member of the Istituto Veneto di Lettere, Scienze e Arti in Venice, founded by Napoleon. Former Professor of Mathematics at La Sapienza University in Rome (until 2015), since 1997 he has organized the Mathematics and Culture conferences in Venice. He has organized several exhibitions, cooperating with The Biennale of Art of Venice and the Prada Foundation among others. He is a member of the board of the Journal "Leonardo: art, science and technology", MIT Press, a filmmaker, including a film on M.C. Escher, and author of the series "Art and Math". He is also editor of the series "Mathematics and Culture" and “Imagine Math” by Springer-Verlag, as well as the series "The Visual Mind" by MIT Press. His most recent books include “Bolle di sapone tra arte e matematica”, 2010, which won the best Italian essay award at Viareggio 2010; “Numeri immaginari: cinema e matematica”, Bollati Boringhieri, 2012; “Il mio Harry’s bar”, Archinto ed., 2012;  “Imagine Math 3”, Springer 2013; “Flatlandia di E. Abbott, with DVD, music by Ennio Morricone, 2008, “Imagine Maths 4” 2015, “Imagine Maths 5”, 2016. “Racconto matematico: memorie impersonali”, to appear 2019, Bollati Boringhieri.

Marco Abate is a Full Professor of Geometry at the University of Pisa. He has written more than one hundred scientific papers and textbooks, as well as several papers on the popularization of mathematics. His interests include holomorphic dynamics, geometric function theory, differential geometry, writing (comic books and more), photography, origami, and travelling (having already visited Antarctica his next destination is the Moon).

“The books contain diverse contributions that reflect the presentations at a recurrent conference that wants to bring together scientists, mathematicians, and artists from different disciplines to discuss the influence of mathematics in our culture in the broadest possible sense.” (Adhemar Bultheel, European Mathematical Society, euro-math-soc.eu, March 20, 2019)