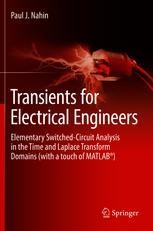 This book offers a concise introduction to the analysis of electrical transients aimed at students who have completed introductory circuits and freshman calculus courses. While it is written under the assumption that these students are encountering transient electrical circuits for the first time, the mathematical and physical theory is not ‘watered-down.’ That is, the analysis of both lumped and continuous (transmission line) parameter circuits is performed with the use of differential equations (both ordinary and partial) in the time domain, and the Laplace transform. The transform is fully developed in the book for readers who are not assumed to have seen it before. The use of singular time functions (unit step and impulse) is addressed and illustrated through detailed examples.

The appearance of paradoxical circuit situations, often ignored in many textbooks (because they are, perhaps, considered ‘difficult’ to explain) is fully embraced as an opportunity to challenge students. In addition, historical commentary is included throughout the book, to combat the misconception that the material in engineering textbooks was found engraved on Biblical stones, rather than painstakingly discovered by people of genius who often went down many wrong paths before finding the right one. MATLAB® is used throughout the book, with simple codes to quickly and easily generate transient response curves.

Paul Nahin was born in California, and did all of his schooling there (Brea-Olinda High 1958, Stanford BS 1962, Caltech MS 1963 and - as a Howard Hughes Staff Doctoral Fellow - UC/Irvine PhD 1972, with all degrees in electrical engineering). He has taught at Harvey Mudd College, the Naval Postgraduate School and the Universities of New Hampshire (where he is now emeritus professor of electrical engineering) and Virginia.

Prof. Nahin has published a couple of dozen short science fiction stories in ANALOG, OMNI and TWILIGHT ZONE magazines, and has written 19 books on mathematics and physics for scientifically-minded and popular audiences alike. He has given invited talks on mathematics at Bowdoin College, the Claremont Graduate School, the University of Tennessee and Caltech, has appeared on National Public Radio's "Science Friday" show (discussing time travel) as well as on New Hampshire Public Radio's "The Front Porch" show (discussing imaginary numbers) and advised Boston's WGBH Public Television's "Nova" program on the script for their time travel episode. He gave the invited Sampson Lectures for 2011 in Mathematics at Bates College (Lewiston, Maine).