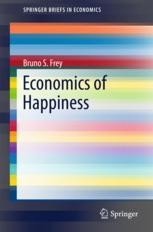 This book focuses on what makes people happy. The author explains methods for measuring subjective life satisfaction and well-being by discussing economic and sociodemographic factors, as well as the psychological, cultural and political dimensions of personal happiness. Does higher income increase happiness? Are people in rich countries, such as the United States, the United Kingdom and Scandinavian countries, happier than those living elsewhere? Does losing one’s job make one unhappy? What is the role of genetic endowments inherited from our parents? How important are physical and emotional health to subjective life satisfaction? Do older people tend to be happier, or younger people? Are close social relationships necessary for happiness? Do political conditions, such as respect for human rights, democracy and autonomy, play a part? How can governments contribute to the population’s happiness? This book answers these questions on the basis of extensive interdisciplinary research reflecting the current state of knowledge. The book will appeal to anyone interested in learning more about the various dimensions of personal well-being beyond the happiness-prosperity connection, as well as to policymakers looking for guidance on how to improve happiness in societies.

Bruno S. Frey is Permanent Visiting Professor at the University of Basel and Research Director at CREMA – Center for Research in Economics, Management and the Arts, Zurich. Before he was Professor at the Universities of Constance, Zurich, Chicago, Warwick and Friedrichshafen; he was awarded five Honorary Doctorates in five countries. Frey published 21 books and more than 600 articles in scholarly journals.

“Frey’s book is a good piece of scholarly work and leads readers to think about new developments such as the transition to a digital economy, rarely studied topics such as war (including such sub-topics as combat flow and afterglow post-traumatic stress disorder), prison inmates, the use of happiness pills, and complicated decision-making processes (cognitive biases) and their possible effect on the happiness of individuals.” (Devrim Dumludag, Journal of Economics, Vol. 126, 2019)

“The book is well structured; after having a short introduction about the concept of happiness, we are guided through all the major economic questions, namely how to measure happiness, the possible determinants of happiness, and the relation of happiness to governments, consumption, management, religion, war, television and the digital world in general.” (Adam Tamas Tuboly, Journal of Economic Methodology, Vol. 26 (2), 2019)