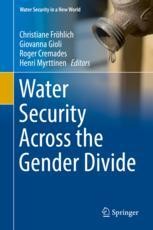 Water Security Across the Gender Divide

This book examines water security as a prime example of how the economic, socio-cultural and political-normative systems that regulate access to water reflect the evolving and gendered power relations between different societal groups. Access to water is characterized by inequalities: it depends not only on natural water availability, but also on the respective socio-political context. It is regulated by gender-differentiated roles and responsibilities towards the resource, which are strongly influenced by, among others, tradition, religion, customary law, geographical availability, as well as the historical and socio-political context.

While gender has been recognized as a key intervening variable in achieving equitable water access, most studies fail to acknowledge the deep interrelations between social structures and patterns of water use. Proof of these shortcomings is the enduring lack of data on water accessibility, availability and utilization that sufficiently acknowledges the relational nature of gender and other categories of power and difference, like class and socioeconomic status, as well as their comprehensive analysis. This book addresses this major research gap.

Christiane Fröhlich is a postdoctoral researcher at Universität Hamburg, Germany. With a background in environmental conflict research, she has worked extensively on water conflicts on the international, national and local levels, as well as on environmental drivers of human mobility, both with a regional focus on the Southern Mediterranean.

Giovanna Gioli works as Livelihoods Adaptation Specialist at the International Centre for Integrated Mountain Development, Nepal.  Drawing on political ecology, participatory research, and critical geography, her research revolves around the nexus between livelihoods, human mobility and the environment, with a focus on South Asia. She also engages with water resources geography and hazards.

Roger Cremades is an environmental economist and works as research associate at the Climate Service Center Germany (GERICS), where he engages communities and decision-makers in his research about the nexus of water, land and energy in diverse environmental, technological and socio-economic contexts. He is a pioneer in the economics of this nexus. His water research has been published in Environmental Research Letters, Earth System Dynamics, and Earth’s Future.

Henri Myrttinen, Head of Gender in Peacebuilding at International Alert, has over 15 years of experience working on gender, conflict sensitivity and peacebuilding. He has worked extensively in fragile and conflict-affected contexts and has also published numerous papers and chapters on various aspects of gender and peacebuilding, including integrating men and masculinities into peacebuilding, gender and reintegrating former combatants, gender and security sector reform, as well as gender and small arms. He holds a Ph.D. in Conflict Resolution and Peace Studies from the University of KwaZulu-Natal, South Africa, with a thesis on masculinities and violence in Timor-Leste.