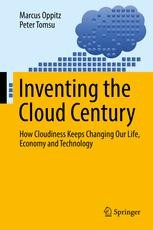 How Cloudiness Keeps Changing Our Life, Economy and Technology

This book combines the three dimensions of technology, society and economy to explore the advent of today’s cloud ecosystems as successors to older service ecosystems based on networks. Further, it describes the shifting of services to the cloud as a long-term trend that is still progressing rapidly.The book adopts a comprehensive perspective on the key success factors for the technology – compelling business models and ecosystems including private, public and national organizations. The authors explore the evolution of service ecosystems, describe the similarities and differences, and analyze the way they have created and changed industries. Lastly, based on the current status of cloud computing and related technologies like virtualization, the internet of things, fog computing, big data and analytics, cognitive computing and blockchain, the authors provide a revealing outlook on the possibilities of future technologies, the future of the internet, and the potential impacts on business and society.

Marcus Oppitz, born 1957, has studied computer science and received his MSC from the University of Technology, Vienna. He was assistant professor at the University of Technology, Vienna between 1982 and 1986, working on the application of logical programming and on computer aided training systems, also participating in post graduate courses at Stanford University. Beginning 1986 his started a career as managing director and partner in Austrian software companies working on the development of ERP and retail management applications. He was co-founder of a number of startups. In 2000 Marcus Oppitz founded together with three partners Solvedirect, a company developing and marketing a cloud solution for IT service management based in Austria and San Jose, CA. After the successful acquisition of Solvedirect by Cisco in 2013, he worked for Cisco as product manager, concentrating on the long-term strategy for cloud solutions providing the integration of business processes. Marcus Oppitz is board member and advisor of startups in the field of cloud service based applications and teaches Cloud Computing at the University of Applied Sciences. Marcus Oppitz lives in Austria.

Peter Tomsu, born 1953, has studied Electrical Engineering and received his PHD and MSC from the Technical University Vienna. He has been working in the telecommunication and networking industry for more than 30 years. His career started as technical leader for microelectronics development before he joined Alcatel in 1984 with the responsibility for hardware and software design for communication systems and product marketing. Later he became CTO for an Austrian systems integrator, network consultant and worked for Austrian Telecom being responsible for the deployment of the first IP infrastructure. He joined Cisco in 1996 as international consulting engineer and was involved in the development and initial deployment of numerous new disrupting technologies like ATM, MPLS, WiFi, mobile, IP NGN and optical networking. He was responsible for the design and realization of a large number of networks worldwide before focusing on research in advanced optical networking, high performance computing as well as digital content and media distribution. He was leading the design and specification of Cloud Computing and virtualization in standardization bodies like DMTF, NIST, ITU-T and ISO. Peter Tomsu lives in Austria with his family.
Alles zeigen