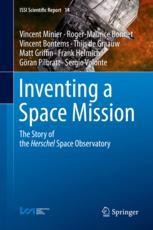 The Story of the Herschel Space Observatory

This book describes prominent technological achievements within a very successful space science mission: the Herschel space observatory. Focusing on the various processes of innovation it offers an analysis and discussion of the social, technological and scientific context of the mission that paved the way to its development. It addresses the key question raised by these processes in our modern society, i.e.: how knowledge management of innovation set the conditions for inventing the future? In that respect the book is based on a transdisciplinary analysis of the programmatic complexity of Herschel, with inputs from space scientists, managers, philosophers, and engineers.

This book is addressed to decision makers, not only in space science, but also in other industries and sciences using or building large machines. It is also addressed to space engineers and scientists as well as students in science and management.

Roger-Maurice Bonnet graduated from Paris University. A space scientist and solar astronomer, he was in charge of the first French space astronomy rocket program. He led the Laboratoire de Physique Stellaire et Planétaire of CNRS (now renamed Institut d’Astrophysique Spatiale) from1969 until 1983 when he was elected Director of the ESA Science Program. There he established the first long term scientific program of ESA “Space Science Horizon 2000”, a balanced mix of more than 20 large, medium and small missions, among which Herschel and Planck. In 2003 he became Executive Director of the International Space Science Institute (ISSI). He is the author of more than 150 scientific articles and several books, several of them published by Springer.

Frank Helmich studied at the University of Groningen and obtained his PhD at the University of Leiden. After a short excursion to stratospheric chemistry at SRON in Utrecht, he moved to SRON Groningen to work on HIFI calibration and science. In 2007 he became Head of SRON’s Low Energy Astrophysics Division and took over as Principal Investigator for Herschel/HIFI. In 2015 he became Leader of the Astrophysics Program of SRON. He is (co-) author of 70-refereed papers.

Vincent Bontems graduated from École Normale Supérieure de Lettres et Sciences Humaines and earned a PhD in philosophy at the École des Hautes Études en Sciences Sociales. He works at the laboratory Larsim of the CEA on epistemology of physics, technology and innovation, and sociology of sciences. He is a member of the “Physics and Fundamental Questions” committee of the French Society of Physics. He has written a book on Gaston Bachelard (Bachelard, Belles Lettres, 2010) and many articles, including “Gilbert Simondon’s genetic ‘mécanologie’ and the understanding of laws of technical evolution” (Techne, 13: 1, 2009) and “What does innovation stand for? Review of a watchword in research policies” (Journal of Innovation Economics, 15, 2014).

ESA Herschel Project Scientist Göran Pilbratt received his PhD from Onsala Space Observatory, Chalmers University of Technology, Göteborg, Sweden in 1986. His thesis topic was ‘Very Long Baseline Interferometry (VLBI) observations of superluminal sources’. In the same year, he joined ESA as a Research Fellow and was initially involved in ESA studies on space-based VLBI missions. He was appointed ESA Staff Scientist in 1988.
In 1991, he was appointed Study Scientist for FIRST, and became Project Scientist for the mission in 1995, a position he still holds. Following his proposal, the mission was renamed Herschel in December 2000 to celebrate the bicentenary of the discovery of infrared light by William Herschel.

Sergio Volonte graduated in physics at Université de Liège in 1967. From 1968 to 1971 he was ESRO research fellow at the Culham Laboratory (UK) and obtained is PhD from University College London in 1972. He returned to Belgium at Departement d’Astrophysique, Université de Mons where he lectured in Astronomy and Spectroscopy. In 1986, he joined ESA as Coordinator for Astronomy missions in the Directorate of the Science Programme at the Paris Headquarters. He retired in 2008 as Head of the ESA Science Programme Planning & Coordination Office. He is the author or co-author of some 80 scientific papers and a member of various societies, in particular, the International Astronomical Union, Cospar, the International Astronautical Federation as well as fellow of the Royal Astronomical Society.

Vincent Minier received his PhD in astrophysics from Chalmers University of Technology, Gothenburg, Sweden. After a two-year research position at UNSW in Sydney, he came back to France in 2003 to work at CEA / Paris Saclay University. Star formation is his main field of expertise, and he has conducted observations with word-class telescopes both on Earth (Chile, Australia, US, Europe) and in space (Herschel space observatory). Besides fundamental science, he leads the ExplorNova research project on philosophy of innovation within Big science instruments and on information technologies to disseminate science through astrophysics. He is the author of more than 100 scientific articles, the MOOC ExplorUnivers on popular astronomy, Web sites dedicated to space missions and science videos.

Thijs (Mattheus) de Graauw studied at the University of Utrecht. After graduation he became staff member of ESA’s Space Science Department at ESTEC where he started a submm instrumentation development, in collaboration with a number of European laboratories, with the aim to prepare for an astronomy  space mission. He was study scientist for several optical, ir and submm space projects and technical research programs (TRP) for future missions. He was member of the FIRST study team from 1982 till 1986. In 1983 he became director of SRON’s space research laboratory in Groningen to lead the Dutch IR and submm space program. He was principal investigator for the Short Wavelength Spectrometer (SWS) of the Infrared Space Observatory (ISO) and for Herschel’s Heterodyne Instrument for the Far Infrared (HIFI). After delivery of the instrument to ESA (2008) he left HIFI to become director of the Atacama Large Millimeter/submillimeter Array (ALMA) to lead the construction of the ALMA Observatory. Since 2013, in his second retirement, he is engaged in fostering development of submm instrumentation and science in Brasil/Argentina and Russia. He is (co-) author of more than 150-refereed scientific papers.

Matt Griffin studied Electrical Engineering at University College Dublin and Astrophysics at Queen Mary College London, graduating with a PhD in 1985. He remained at Queen Mary until 2001, when he joined the Astronomy Instrumentation Group at Cardiff University. His research work has included the development of instruments for both ground-based and space-borne observatories, and study of planetary atmospheres, star formation, galaxy evolution, and the Earth’s atmosphere. He has worked on many ground-based and space-borne instrument projects. He was a Co-Investigator in the team that built the Long Wavelength Spectrometer for ESA's Infrared Space Observatory, and was the Principal Investigator for the Herschel-SPIRE instrument. He is the author of over 200-refereed publications.