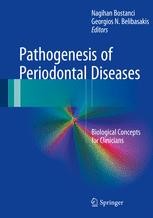 This book aims to provide clinicians with a refined understanding of the biology that underlies periodontal diseases, thereby offering a sound basis for improved clinical decision making with regard to prevention strategies, diagnosis, and therapy. All significant aspects of periodontal pathogenesis are covered, including the roles played by the oral microbiome and biofilms, bacterial virulence factors, cells of the immune system, matrix metalloproteinases, proinflammatory and osteolytic cytokines, genetic factors, and antimicrobial peptides.

Periodontal diseases are among the most common infectious diseases in humans, and the primary cause of tooth loss in adults. The functional and esthetic problems associated with these diseases compromise quality of life, and their treatment imposes large financial burdens on national health systems and private patients. Up-to-date knowledge of periodontal pathogenesis is therefore essential for the contemporary clinician. This book, written by experts from Europe and the Americas, delivers such knowledge in an accessible, clinician-friendly way.
Alles zeigen
Über die Autor*innen

Prof. Bostanci is dually qualified with a Dental degree (Ege University, Izmir, Turkey, 1999) and a PhD in Periodontology (University of London, UK, 2007). She also received advanced clinical training in Periodontology (Ege University, Izmir and Eastman Dental Institute, London). In 2007-2008, she worked as Clinical Lecturer at the Centre for Clinical and Diagnostic Oral Sciences, Barts and the London Dental Institute, QMUL. In 2008-2009 she attained a Walport Clinical Academic Lectureship funded by the National Institute of Health Research (NIHR), at the Division of Periodontology, UCL Eastman Dental Institute, London, UK. From 2009 until 2016 she was Principal Investigator at the Institute of Oral Biology, Center of Dental Medicine of the University of Zürich, Switzerland. In 2013 she attained her Habilitation (Venia Legendi) in Oral Biology and Periodontology. She has received distinguished scientific awards in her field, including the Sir Wilfred Fish Price of the British Society of Periodontology, the Philips Oral Healthcare Young Investigator Research Prize and the Sigmund Socransky Young Investigator Award of the International Association for Dental Research (IADR). She is Associate Editor for BMC Oral Health and Editorial Board member for Oral Health and Preventive Dentistry, and Frontiers of Cellular and Infection Microbiology. Her work is a great example of incorporation of basic sciences into clinical research, focusing on the investigation of various molecular biomarkers of disease in biological samples (including oral tissue, gingival crevicular fluid, serum and saliva). Hence, her special research interests span from diagnostic and prognostic molecular markers for periodontal diseases, to the impact of oral health on general health. She is currently Professor of Inflammation Research specializing in Periodontics, at the Department of Dental Medicine, Karolinska Institute, Sweden.

Prof. Belibasakis studied Dentistry at the Aristotle University of Thessaloniki, Greece (1994-1999), attained a PhD in Oral Microbiology at Umea University, Sweden (2000-2004), an MSc in Periodontology (Distinction) at Queen Mary University of London (QMUL), UK (2007-2009), and a Postgraduate Certificate in Academic Practice, also at QMUL (2006-2009). He worked for almost a year as Post-doctoral Research Associate at the Department of Craniofacial Development, King’s College London Dental Institute (2005). Thereafter, he attained a Lectureship in Oral Biology at Barts and the London Dental Institute, QMUL (2005-2009). In 2009 he was recruited as Principal Investigator at the Institute of Oral Biology, Center of Dental Medicine, University of Zürich, completing his Habilitation (Venia Legendi) in Oral Microbiology and Immunology in 2012. In late 2011 he became Head of the Section of Oral Microbiology and Immunology, Center of Dental Medicine, University of Zürich, and in early 2014 he attained a Professorship in Oral Microbiology and Immunology, a position which he held until 2016. He is Associate Editor for BMC Microbiology, BMC Infectious Diseases, Frontiers in Cellular and Infection Microbiology and Archives of Oral Biology, and serves as Editorial Board member in several journals. In 2012 he received the “Anthony Rizzo Young Investigator Award” of the International Association for Dental Research (IADR). He is a member of the IADR for more than 18 years and engaged in its scientific activities, including being the Group Programme Chair of the Periodontal Research – Pathogenesis theme. His research focus is on the microbial aetiology and inflammatory pathogenesis of oral diseases, with a particular orientation on periodontal, peri-implant and endodontic infections. Experimental host-microbe interaction models are the stronghold of his research, complemented by clinical studies aiming at identifying host and microbial markers for early disease diagnosis. He is currently Professor of Clinical Oral Infection Biology, at the Department of Dental Medicine, Karolinska Institute, Sweden.