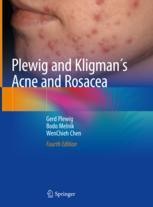 Plewig and Kligman´s Acne and Rosacea

This book is a richly illustrated account of the clinical features, microscopic anatomy, and management of acne, acne-like disorders, and rosacea. The coverage includes all aspects of these diseases, from physiology to pathology, bacteriology, and endocrinology; special emphasis is placed on histopathology. Moreover, the full spectrum of pharmacological and physical methods of controlling the disorders are critically examined and the widely experienced team of authors present in detail their personal strategies for successful treatment.

Since it was first published, Acne and Rosacea has become a well-known classic. This fourth edition has been completely revised and updated, with entirely new chapters on topics such as etiopathogenesis, auto-inflammatory acne syndromes, the role of nutrition, and novel therapies. The text is supplemented by selected references and a wealth of clinical and histopathological pictures, including additional high-definition photographs. The book is designed for all those physicians – dermatologists, general practitioners, pediatricians, gynecologists, pharmacologists, and surgeons – who must identify and treat the many different forms of acne and rosacea.

Gerd Plewig served as Professor and Chairman at the Department of Dermatology, Ludwig Maximilian University, Munich, Germany from 1991 to 2006. His other academic appointments have included Professor and Chairman, Department of Dermatology, University of Düsseldorf, and Medical Director, Clinical Center, School of Medicine, Ludwig-Maximilian-University, Munich. Dr. Plewig has been an author or editor of numerous previous books and has served on the editorial and advisory boards of many journals. He has received various awards and honors, including several Gold Medals from the American Academy of Dermatology. He became a Fellow of the Royal College of Physicians London (FRCP) in 1997, and was awarded the title Doctor of Medicine honoris causa by the Charles University Prague, Czech Republic 2002; Medical University Wroclaw, Poland 2005; and the Comenius University of Bratislawa, Slovakia 2007.

Bodo Melnik is an Associate Professor at the University of Osnabrück, Germany, where he has taught dermatology, trichology and cosmetology since 1991. A member of the European Society for Dermatological Research (ESDR), Dr. Melnik has been trained in lipid research as a visiting scientist at the Cardiovascular Research Institute, UCSF, USA, and subsequently worked as head of the lipid research laboratory of the Department of Dermatology at Heinrich Heine University in Düsseldorf, Germany. After completing his teaching qualification as a professor, Dr. Melnik was awarded the Felix-Hoppe-Seyler Prize by the German Society for Laboratory Medicine. Since 1990, he has been working as senior dermatologist in his outpatient clinical practice in Gütersloh. Dr. Melnik is coeditor of the Journal of Translational Medicine and author of more that 100 articles and book chapters in international medical journals. His research interests include acne, rosacea, lipid and milk metabolism, and nutrition.

WenChieh Chen is the former head of a dermatology department in Taiwan​ and senior consultant in dermatology of various university hospitals in Germany. Most recently he ​has been working at the Technical University and Ludwig Maximilian University, both in Munich, Germany. ​His major interest and research field is hormone-mediated skin disorders. Since​ 2016 he has served at the IZZ-Immunologie Zentrum Zürich​ and MediX Praxis in Zürich, Switzerland. During his clinical practice in dermatology and venereology, he had the opportunity to ​teach as an adjunct​ professor at the Technical University of Munich​ and as visiting professor in many universities throughout China​.

“This book covers the compendium of acne and acne‐related diseases, as well as acne mimics. It contains extensive, high-quality illustrations. … this is a useful reference for any healthcare provider caring for patients with acne and acneiform disorders. … This is a useful addition to the library of healthcare providers treating patients with acne, especially those who wish to delve into the subject in greater depth.” (Renata H. Mullen, Doody's Book Reviews, 27 September, 2019)