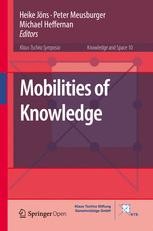 This collection of essays examines how spatial mobilities of people and practices, technologies and objects, knowledge and ideas have shaped the production, circulation, and transfer of knowledge in different historical and geographical contexts. Targeting an interdisciplinary audience, Mobilities of Knowledge combines detailed empirical analyses with innovative conceptual approaches. The first part scrutinizes knowledge circulation, transfer, and adaption, focussing on the interpersonal communication process, early techniques of papermaking, a geographical text, indigenous knowledge in exploration, the genealogy of spatial analysis, and different disciplinary knowledges about the formation of cities, states, and agriculture. The second part analyses the interplay of mediators, networks, and learning by studying academic careers, travels, and collaborations within the British Empire, public internationalism in Geneva, the global transfer of corporate knowledge through expatriation, graduate mobility from the global south to the global north, and the international mobility of degree programs in higher education.This book is open access under a CC BY 4.0 license.

Peter Meusburger, Prof. Dr., is Distinguished Senior Professor and held a full Professorship of Social Geography at the Department of Geography at Heidelberg University (1983-2007). His recent research interests include

·Geography of Labor and Economic Geography: educational achievement and professional skills of the labor force; spatial mobility, career and networks of scientists; spatial concentration of jobs for the highly skilled labor force; spatial disparities of the feminization of professions; female employment rates; economic and social transformations in Hungary after the change of the political system (1989); Liechtenstein as a tax-haven.

·Ethnic Minorities: educational achievements of ethnic and religious minorities; the cultural dimension of knowledge; minorities in the public school system.

·Motivations, experiences and outcomes of transnational academic mobility and collaboration since the 19th century.

·The role of academic travel for knowledge production and circulation in different disciplines, and for the historical geographies of knowledge nodes and networks.

·Geographies of the university, with a focus on internationalization strategies, the politics of world university rankings, and British university expansion in the 1960s.

·The development of triadic thought in social theory based on an integration of social constructivist and actor-network theoretical approaches in a ‘trinity of actants’.

Michael Heffernan has been Professor of Historical Geography at the University of Nottingham since 1999. He has held visiting research professorships at UCLA and Heidelberg, the latter as an Alexander von Humboldt Fellow. Recent interests include:

·Histories of geography and cartography since the 18th century in Europe and North America, with a focus on the decades immediately before, during and after WWI.

·Historical and political geographies of the idea of Europe since the Renaissance, with particular reference to the first half of the 20th century.

·Internationalism as a cultural, scientific and political aspiration during the 1920s and 1930s (currently funded by the UK Arts and Humanities Research Council).

·The ‘hidden’ historical geographies of World War One, with particular reference to immigrant communities in Britain (currently funded by the UK Arts and Humanities Research Council).

·The historical geographies of university expansion in the UK during the 1960s.

·Counter-cultural travel since the 1950s.