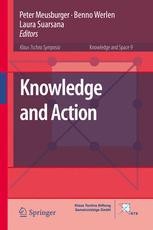 This volume explores interdependencies between knowledge, action, and space from different interdisciplinary perspectives. Some of the contributors discuss knowledge as a social construct based on collective action, while others look at knowledge as an individual capacity for action. The chapters contain theoretical frameworks as well as experimental outcomes.

Readers will gain insight into key questions such as: How does knowledge function as a prerequisite for action? Why are knowledge gaps growing and not diminishing in a knowledge society? How much knowledge is necessary for action? How do various types of knowledge influence the steps from cognition to action? How do different representations of knowledge shape action? What impact have spatial conditions for the formation of knowledge? What is the relationship between social and geographical space? The contributors consider rationality in social and economic theories as well as in everyday life. Attention is also given to action theoretic approaches and rationality from the viewpoints of psychology, post-structuralism, and human geography, making this an attractive book for students, researchers and academics of various backgrounds.

Peter Meusburger, Prof. Dr. (*1942) graduated in Geography at Innsbruck University. 1983 – 2007 he held a full Professorship of Economic and Social Geography at the Department of Geography at Heidelberg University. He was visiting scholar in Japan, USA, Hungary, China and Brazil. Since 2007 he is Distinguished Senior Professor of Heidelberg University. He published more than 300 articles and wrote and edited 28 books. His recent research interests include • Geographies of Knowledge, Science and Education (Spatial disparities of knowledge and educational achievement; relations between knowledge and power; the nexus between knowledge and space; milieus of creativity; spatial “mobility” of knowledge; knowledge and action; knowledge in organizations; knowledge and economic performance; schooling situation in sparsely inhabited peripheral areas)• Geography of Labor and Economic Geography (Educational achievement and professional skills of the labor force; spatial mobility, career and networks of scientists; spatial concentration of jobs for the highly skilled labor force; spatial disparities of the feminization of professions; female employment rates; economic and social transformations in Hungary after the change of the political system (1989); Liechtenstein as a tax-haven)• Ethnic Minorities (Educational achievements of ethnic and religious minorities; the cultural dimension of knowledge; minorities in the public school system).

Benno Werlen, Prof. Dr. (*1952) studied geography, sociology, cultural anthropology and economy at the Université de Fribourg (Switzerland). He got his PhD from the faculty of philosophy of the University of Fribourg and his Habilitation from the faculty of natural sciences of the university of Zurich. As guest professor he was working at the universities of Salzburg, Jena, Geneva and Nijmegen as well as at the Swiss Federal Technical Institute of Technology Zürich (ETH), as visiting scholar he worked at the universities of Cambridge, the London School of Economics, and at the University of California, Los Angeles (UCLA). Since 1997 he holds the chair of social geography at the Friedrich-Schiller-University of Jena. He is the founder of action centered geography, the initiator and the Executive Director of the ‘2016 International UN-Year of Global Understanding’ proclaimed by the International Sciences Councils of the Natural, Social and Human Sciences (ICSU, ISSC, CIPSH), Chair of the IGU-Commission ‘Cultural Approach in Geography’ (204-2106), and was a Panel Member of the European Research Council (Brussels) from 2008-15. His main interests are theory and methodology of the action centered geography, social spatiality, and (empirical) studies of political regionalism and nationalism/regional and national identities, processes of globalization and urbanization.Book Publications (selection)• Gesellschaft, Handlung und Raum. Grundlagen handlungstheoretische Sozialgeographie. [Sociaty, Action and Space. Foundation of Action Theoretical Social Geography]. Stuttgart: Steiner 1987 (3th edition: 1997)• Society, Action and Space. An Alternative Human Geography. Preface by Anthony Giddens. London: Routledge 1993• Kulturen und Raum. [Cultures and Space] Zürich: Rüegg Verlag 1993• Zur Ontologie von Gesellschaft und Raum. [On Ontology of Society and Space] Stuttgart: Steiner 1995 (2nd ed: 1999)• Globalisierung, Region und Regionalisierung. [Globalization, Region, and Regionalization] Stuttgart: Steiner 1997 (2nd ed. 2007)• Sozialgeographie. Eine Einführung. [Social Geography. An Introduction] Bern: Haupt/UTB 2000 (3th ed. 2008)• Gesellschaftliche Räumlichkeit. Bd. 1: Ort der Geographie; Bd. 2: Konstruktion geographischer Wirklichkeiten. [Societal Spatiality. Vo. 1: Places of Geography; vol 2: Construction of Geographical Realities]. Stuttgart: Steiner 2010• Global Sustainability. Cultural Perspectives and Challenges for Transdisciplinary Integrated Research. Cham/Heidelberg/New York/Dordrecht/London: Springer 2015
Laura Suarsana is Research Associate at the Department of Geography at Heidelberg University. Her main research fields include Geographies of Civic Engagement, Civil Society and Philanthropy, Geographies of Public and Common Goods, Network Analysis and Social and Economic Geography.