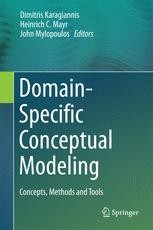 This book draws new attention to domain-specific conceptual modeling by presenting the work of thought leaders who have designed and deployed specific modeling methods. It provides hands-on guidance on how to build models in a particular domain, such as requirements engineering, business process modeling or enterprise architecture. In addition to these results, it also puts forward ideas for future developments. All this is enriched with exercises, case studies, detailed references and further related information. All domain-specific methods described in this volume also have a tool implementation within the OMiLAB Collaborative Environment – a dedicated research and experimentation space for modeling method engineering at the University of Vienna, Austria – making these advances accessible to a wider community of further developers and users.

The collection of works presented here will benefit experts and practitioners from academia and industry alike, including members of the conceptual modeling community as well as lecturers and students.

Dimitris Karagiannis holds a full professor position for Business Informatics at the University of Vienna since 1993, leading the Research Group Knowledge Engineering. He earned a PhD degree from the Technical University Berlin in 1987. The same year he joined the Research Institute for Application-oriented Knowledge Processing in Ulm as division head for “Enterprise Information Systems”. Karagiannis holds an honorary professorship from the Babes-Bolyai University in Cluj-Napoca, Romania. His research interests include meta-modelling, knowledge engineering, business process management, enterprise architecture management and artificial intelligence. The industrial application of his meta-modelling research was demonstrated within the BOC Group, a European software- and consulting company. In parallel scientific applications of his research are used in the Open Models Laboratory - OMiLAB, http://www.omilab.org, an open collaborative environment for modelling method engineering, which he has established and is currently leading.

Heinrich C. Mayr has been a full professor of Informatics at Universität Klagenfurt since 1990, leading the Application Engineering Research Group. Until then he was an assistant professor at the University of Karlsruhe (today: KIT), visiting professor at several universities, and CEO of a German software company. His research is documented in over 200 publications and includes information system design methodologies, requirements and model engineering, and knowledge management. Amongst other functions, he was President of the Gesellschaft für Informatik (GI), Vice President of the Council of European Professional Informatics Societies (CEPIS), and chairman of the board of trustees of a regional utility company. For 6 years he served as Rector of the University. Currently he is editor in chief of the Lecture Notes in Informatics (LNI), vice-chair of the ER steering committee, chairperson of the council of the Software Internet Cluster SIC, and Member of the TC Wirtschaftsinformatik of the German Accreditation Organisation ASIIN.

John Mylopoulos holds a professor emeritus position at the Universities of Toronto and Trento. He earned a PhD degree from Princeton University in 1970 and joined the faculty of the Department of Computer Science at the University of Toronto the same year. His research interests include conceptual modelling, requirements engineering, data semantics and knowledge management. Mylopoulos is a fellow of the Association for the Advancement of Artificial Intelligence (AAAI) and the Royal Society of Canada (Academy of Applied Sciences). He has served as programme/general chair of international conferences in Artificial Intelligence, Databases and Software Engineering, including IJCAI (1991), Requirements Engineering (1997, 2011), and VLDB (2004). Mylopoulos is currently leading a project titled "Lucretius: Foundations for Software Evolution <http://www.lucretius.eu/>”, funded by an advanced grant from the European Research Council.