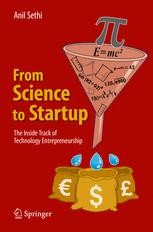 From Science to Startup

The Inside Track of Technology Entrepreneurship

This book charts the experiences, pitfalls and knowledge behind leading scientific ideas to successful startups. Written by one of Switzerland's top serial entrepreneurs, this book is a must-read for scientists and academicians who want to see their idea turn into a product and change the market. It is also pertinent for finance and business professionals who aspire to become technology entrepreneurs. Starting with personal qualities of an entrepreneur, Anil Sethi discusses successful ideas, technology evaluation, team formation, patents and investor expectations. To guide the entrepreneur, this book also analyzes deal closing, equity conversion and ideal exit strategies to follow. Ultimately Anil Sethi reveals the 'inside track' which helps understand what drives entrepreneurs and what they wouldn't admit.

Anil Sethi is "Entrepreneur-in-Residence" at ETH Zurich, and a serial entrepreneur, founder of Swiss Extension, who also founded Flisom, one of the leading flexible PV companies in the world.  Anil took the technology from an idea at the Federal Institute of Technology in Zurich, changing it to become a real company. He then led the company as the CEO and CFO from its inception in 2005 to 2012.  He led three rounds of funding and built a team of over 20 people to transition the technology to market.

Anil was recognised for his efforts by way of honours by various entities along the way.  These included being honoured as a Technology Pioneer by the World Economic Forum and an invitation to attend WEF in Davos in 2007.  He was also invited to be part of the delegation led by President Doris Leuthard in 2010 to Washington, to help the US in clean-energy related employment generation.  Bilan also recognised Anil as one of Switzerland’s 300 most influential people in 2010.

Pioneer Prize: a technical project (Swiss) on the threshold of market entry is granted this award by the Zurich Kantonal Bank.  It

is awarded based on excellence in the transfer between science and industry, creativity, innovation, value, marketability and social relevance.

Red Herring award: Red Herring selects 100 world-class start-up companies in Europe, or, as they put it, “100 reasons why Europe can compete with the US”.

Anil has been invited by various forums in Europe, Asia and the US as a speaker, including at the EU’s Energy R&D policy in Brussels in 2011 and at the Global Summit on Innovation and Entrepreneurship in Dubai.

“To take scientific skilled people into business is key for innovation: the author attests solid experience in dealing with and acting in both fields.” (Mauro Dell’Ambrogio, State Secretary for Education, Research and Innovation, Switzerland)

“I read Anil's book with great interest. One of the biggest challenges modern education systems are faced with is how we prepare the next generation of leaders, innovators and wealth creators. This book is very helpful for all budding entrepreneurs, a must read.” (Illugi Gunnarsson, Minister for Education, Science and Culture, Iceland)