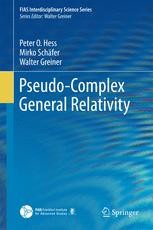 This book explores the role of singularities in general relativity (GR): The theory predicts that when a sufficient large mass collapses, no known force is able to stop it until all mass is concentrated at a point. The question arises, whether an acceptable physical theory should have a singularity, not even a coordinate singularity. The appearance of a singularity shows the limitations of the theory. In GR this limitation is the strong gravitational force acting near and at a super-massive concentration of a central mass. First, a historical overview is given, on former attempts to extend GR (which includes Einstein himself), all with distinct motivations. It will be shown that the only possible algebraic extension is to introduce pseudo-complex (pc) coordinates, otherwise for weak gravitational fields non-physical ghost solutions appear. Thus, the need to use pc-variables. We will see, that the theory contains a minimal length, with important consequences. After that, the pc-GR is formulated and compared to the former attempts. A new variational principle is introduced, which requires in the Einstein equations an additional contribution. Alternatively, the standard variational principle can be applied, but one has to introduce a constraint with the same former results. The additional contribution will be associated to vacuum fluctuation, whose dependence on the radial distance can be approximately obtained, using semi-classical Quantum Mechanics. The main point is that pc-GR predicts that mass not only curves the space but also changes the vacuum structure of the space itself. In the following chapters, the minimal length will be set to zero, due to its smallness. Nevertheless, the pc-GR will keep a remnant of the pc-description, namely that the appearance of a term, which we may call "dark energy", is inevitable. The first application will be discussed in chapter 3, namely solutions of central mass distributions. For a non-rotating massive object it is the pc-Schwarzschild solution, for a rotating massive object the pc-Kerr solution and for a charged massive object it will be the Reissner-Nordström solution. This chapter serves to become familiar on how to resolve problems in pc-GR and on how to interpret the results. One of the main consequences is, that we can eliminate the event horizon and thus there will be no black holes. The huge massive objects in the center of nearly any galaxy and the so-called galactic black holes are within pc-GR still there, but with the absence of an event horizon! Chapter 4 gives another application of the theory, namely the Robertson-Walker solution, which we use to model different outcomes of the evolution of the universe. Finally the capability of this theory to predict new phenomena is illustrated.