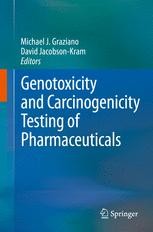 Genotoxicity and Carcinogenicity Testing of Pharmaceuticals

This book provides an overview of the nonclinical testing strategies that are used to asses and de-risk the genotoxicity and carcinogenicity properties of human pharmaceuticals. It includes a review of relevant ICH guidelines, numerous case studies where follow-up studies were conducted to further investigate positive findings, and practical considerations for the use of alternative and emerging tests.

With contributions from recognized experts in the pharmaceutical industry and health authorities, this volume presents a balanced view on the interpretation and application of genotoxicity and carcinogenicity regulatory guidances.

Genotoxicity and Carcinogenicity Testing of Pharmaceuticals is a valuable resource for scientists, regulators, and consultants that are engaged in the conduct, reporting, and review of nonclinical studies. This book will also help academicians better understand and appreciate the complexity of the regulations and breadth of toxicology research that are necessary to support the development and marketing of new drugs.

Michael J. Graziano, Ph.D., has more than 27 years of experience as a toxicologist in the pharmaceutical industry. He is currently Vice President of Drug Safety Evaluation at Bristol-Myers Squibb, where he is responsible for the nonclinical safety testing for all drugs within the BMS portfolio. Within the past 6 years, he has provided nonclinical support for 8 new drug approvals. Prior to joining BMS in 2003, he was Director of Anticancer and Antibacterial Toxicology Programs at Pfizer Pharmaceutical Research, in Ann Arbor, MI, and with the Parke-Davis Pharmaceutical Research Division/Warner-Lambert Company. He is the author or co-author of more than 90 scientific publications and abstracts, many dealing with the nonclinical safety of new therapeutic agents. Dr. Graziano is a member of the IQ DruSafe Leadership Group, the PhRMA Clinical and Preclinical Development Committee, the EFPIA Preclinical Safety Development Committee, and HESI. He is also the PhRMA Deputy Topic Leader for the current ICH S1 Expert Working Group. Dr. Graziano received a B.S. in animal science from Rutgers University, a M.S. in veterinary toxicology from Louisiana State University, and a Ph.D. in toxicology from the University of Kentucky, and was a Post-Graduate Research Toxicologist at the University of California, Berkeley. He is also a Diplomate of the American Board of Toxicology.

David Jacobson-Kram received his Ph.D. in embryology from the University of Connecticut; he then went on to serve as a staff fellow at the National Institute on Aging. After leaving the National Institutes of Health, Dr. Jacobson-Kram joined the faculty of the George Washington University School of Medicine and then later, Johns Hopkins University Oncology Center. During this same period he served, on a part-time basis, as a geneticist in the Office of Toxic Substances at the Environmental Protection Agency and as Acting Branch Chief in the EPA's Office of Research and Development. Dr. Jacobson-Kram served as the Vice President of the Toxicology and Laboratory Animal Health Division at BioReliance Corporation, a contract testing laboratory, from 1988 until 2003. From 2003 until 2014, he served as the Associate Director of Pharmacology and Toxicology in the FDA’s Office of New Drugs. Over the past thirty years, he has served as principal or co-principal investigator on several NIH grants and government contracts and published widely in the areas of genetic and molecular toxicology. Dr. Jacobson-Kram has served as council member, treasurer, and chairman of the Genetic Toxicology Association, executive council member to the Environmental Mutagen Society, Editor of Cell Biology and Toxicology, and as a member of NIH special study sections. In 1996 he became a Diplomate of the American Board of Toxicology.