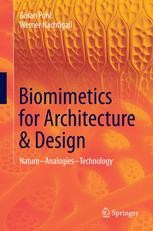 This book provides the readers with a timely guide to the application of biomimetic principles in architecture and engineering design. As a result of a combined effort by two internationally recognized authorities, the biologist Werner Nachtigall and the architect Göran Pohl, the book describes the principles which can be used to compare nature and technology, and at the same time it presents detailed explanations and examples showing how biology can be used as a source of inspiration and “translated” in building and architectural solutions (biomimicry). Even though nature cannot be directly copied, the living world can provide architects and engineers with a wealth of analogues and inspirations for their own creative designs. But how can analysis of natural entities give rise to advanced and sustainable design? By reporting on the latest bionic design methods and using extensive artwork, the book guides readers through the field of nature-inspired architecture, offering an extraordinary resource for professional architects, engineers, designers and urban planners, as well as for university teachers, researchers and students. Natural evolution is seen throughout the book as a powerful resource that can serve architecture and design by providing innovative, optimal and sustainable solutions.

Prof. Pohl is professor for design, structural design and urban planning at the School for Architecture, University of Applied Sciences HTW Saar, Germany. After his studies at the University of Stuttgart, he and his wife Julia Pohl founded the office of Pohl Architects and the Lightweight Structures Institute in Jena, the latter of which has since become Pohl Architects’ research center, taking part in a number of projects on biomimetics and lightweight structures. Their works have been published in numerous reference books and magazines, and endowed with national and international awards. Prof. Pohl developed his understanding of lightweight construction and biomimetics as well as his knowledge of the structural aspects of architecture during his studies at the University of Stuttgart, Germany, under Frei Otto and Peter C. von Seidlein, among others, and during his doctoral studies at the TU Delft in the Netherlands under Ulrich Knaack. He is the editor and author of Textiles, Polymers, and Composites for Buildings (2010) Woodhead Publishing, Cambridge. He is also author of numerous technical lectures and publications in the areas of building materials and systems, natural and artificial fiber composite materials and biomimetics as well. In recent years he has been teaching at several international universities and has participated to national and international research projects. In 2011 he founded the B2E3 Institute for Efficient Buildings at the HTW Saar, which he has been leading since then, and is a founding member of BIOKON INTERNATIONAL. Besides being a member of the panel committee for biomimetics of VDI (Association of German Engineers), he is also chair of the guidelines committee VDI 6226 for Biomimetic Architecture, Industrial Design, and Structural Engineering. Prof. em. Dr. rer. nat. Werner Nachtigall Prof. Nachtigall studied biology, physics and the fundamentals of structural engineering and architecture history at the Ludwig Maximilian University (LMU) in Munich and at the Technical University of Munich. With his pioneering insights on technical biology and bionics and the founding of the “Society for Technical Biology and Bionics,” he has made great contributions to the convergence of biology and technology, and has become an internationally respected authority on the “study of nature”. He is author of numerous books that have set the standards for studies in bionics. His latest book on Biomimetics for Architecture & Design, co-authored with Göran Pohl and published by Springer in 2015, is the first English translation of the 2nd edition of their German book on Bau-Bionik, published by Springer in 2013. He has published, among others, Bionik – Grundlagen und Beispiele für Ingenieure und Naturwissenschaftler (2nd edition, 2002); Biologisches Design – Systematischer Katalog für bionisches Gestalten (2005); Bionik als Wissenschaft – Erkennen, Abstrahieren, Umsetzen (2010); and Bionics by Examples: 250 Scenarios from Classical to Modern Times (2015), which he co-authored with Alfred Wisser. Prof. Nachtigall is also the author of more than 300 technical scientific papers. He is a member of two academies and his work has been honored with several awards.