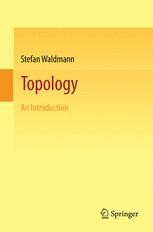 This book provides a concise introduction to topology and is necessary for courses in differential geometry, functional analysis, algebraic topology, etc. Topology is a fundamental tool in most branches of pure mathematics and is also omnipresent in more applied parts of mathematics. Therefore students will need fundamental topological notions already at an early stage in their bachelor programs.

While there are already many excellent monographs on general topology, most of them are too large for a first bachelor course. Topology fills this gap and can be either used for self-study or as the basis of a topology course.

“Stefan Waldmann’s Topology provides a fast-moving introduction to the core concepts of topology. … this is a well put-together introduction to most of the fundamental topics of topology necessary for the study of advanced mathematics. A student well-versed in the notions of set theory and metric spaces should find this an appropriate introductory resource for topology. Additionally, the book provides a very nice and conveniently compact reference for the standard topics of general topology … .” (Keith Jones, MAA Reviews, June, 2015)

“This nifty little volume brings to a broad English-speaking audience the lectures on topology that Waldmann … gave at Erlangen in the summer of 2012. … Readers should note the decent index, the short but surprisingly far-flung list of references, the many exercises, and the goodly number of illustrative figures, many delicately spot-colored for greater intelligibility, that round out this work. Summing Up: Recommended. Graduate students, researchers/faculty, and professionals.” (F. E. J. Linton, Choice, Vol. 52 (6), February, 2015)

“The book is built as a series of lecture notes on topology, a classical and fundamental part of mathematics which should be known by every student, offering a first introduction to this topic. The text is self-contained and enriched with many exercises which enable the students to consolidate the notions discussed in the core of the course. … The book is a valuable asset for self-study for students and can be recommended as a solid basis of a topology course.” (Corina Mohorianu, zbMATH, Vol. 1301, 2015)