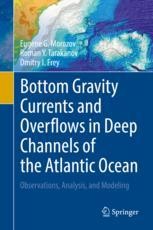 This book is dedicated to the analysis of bottom waters flows through underwater channels of the Atlantic Ocean. The study is based on recent observations of the authors, analysis of historical data, numerical modeling, and literature review. For example, studying both the measurements from the World Ocean Circulation experiment in the 1990s and recent measurements reveals the decadal variations of water properties in the ocean.
Seawater is cooled at high latitudes, descends to the ocean bottom, and slowly flows to the tropical latitudes and further. This current is slow in the deep basins, but intensifies in the abyssal channels connecting the basins. The current overflows submarine topographic structures and sometimes forms deep cataracts when water descends over slopes by several hundred meters. The flow of Antarctic Bottom Water (AABW) is studied on the basis of CTD sections combined with Lowered Acoustic Doppler Profiling (LADCP) carried out annually, and long-term moored measurements of currents.
This book is a collection of oceanographic data, interpretation, and analysis, which can be used by field oceanographers, specialists in numerical modeling, and students who specialize in oceanography.

Eugene Morozov is Head of Laboratory of Hydrological Processes at the Shirshov Institute of Oceanology in Moscow (Russia). He has been working at this Institute after graduating from the Moscow Institute of Physics and Technology in 1970. He never changed his place of work. His research is focused on oceanic internal waves and large-scale circulation of the ocean. He is a field oceanographer and a specialist in the observations in the open ocean. He works on data acquisition, data processing, interpretations, and partly numerical modeling. Since 2002, he has been interested in the abyssal flows in the Atlantic Ocean and abyssal circulation, especially in the flows in the deep fractures. Since 2008, he has been also working on the problems of arctic oceanography in cooperation with the scientists from the University Centre in Svalbard. His interests are in the interaction of the ocean water and glaciers descending to the fjords. During his oceanographic career he participated in 47 long oceanic cruises in all oceans of the globe and in 15 coastal expeditions. His field works are related to internal tides and currents in the ocean such as the Gulf Stream, Kuroshio and their rings, Antarctic Circumpolar Current, Falkland Current, California Current, equatorial countercurrents in the Indian and Atlantic oceans. He was a guest scientist at the Woods Hole Oceanographic Institution (USA), Universidad Complutense de Madrid (Spain), Netherland Institute for Sea Research, University Center in Svalbard, Universidad de Buenos Aires, Universidad de Montevideo, Arizona State University (USA), Florida State University (USA), University of Victoria (Canada), and University of Cape Town. In 1999 he became a member of the Executive Committee of the International Association for the Physical Sciences of the Ocean (IAPSO). From 2011 to 2015 he was the President of this Association. He was also a member of the Executive Committee of the International Union of Geodesy and Geophysics (IUGG) and a member of the Executive Committee of the Scientific Council on Oceanic Research (SCOR).

Roman Tarakanov is a leading scientist of Laboratory of Oceanic Currents at the Shirshov Institute of Oceanology in Moscow (Russia). He has been working at this Institute after graduating from the Moscow Institute of Physics and Technology in 1996. He is a field oceanographer and his career developed at the Shirshov Institute of Oceanology in Moscow. He received a Ph.D. degree in 2006 and then a doctoral degree in 2015. In 2015 he became a Professor of the Russian Academy of Sciences. He works on interpretation of the field data and satellite data and methods of data processing. During his oceanographic career he participated in 21 long oceanic cruises in the Atlantic and Southern oceans. His research focuses on water masses, ocean fronts, and currents. The role of bottom topography on the formation of the oceanic circulation, investigation of the abyssal flows in the Atlantic Ocean, three-dimensional circulation in the Southern Ocean, application of satellite altimetry for correcting field measurements of currents are most important themes of his interest. He has more than 50 referenced publications and one monograph in the field of his scientific interests. Many times he participated in the international oceanographic conferences and convened sessions on the Southern Ocean. He is a professor of the Department of Oceanography at the Moscow Institute of Physics and Technology. He is lecturing for the students on the general problems of physical oceanography and supervising the research of many graduate and post-graduate students. He is also a co-author of well illustrated tutorial on the subject of his lectures.

Dmitry Frey is a senior scientist of Laboratory of Hydrological Processes at the Shirshov Institute of Oceanology in Moscow (Russia). He graduated from the Moscow Institute of Physics and Technology and got a master’s degree in applied physics and mathematics in 2014. Since then he has been working as a physical oceanographer and has defended Ph.D. thesis in 2018. His research is focused on analysis of data of circulation of the ocean. He is a field oceanographer and a specialist in numerical modeling. Despite not very long work at the Shirshov Institute he participated in 11 long oceanic cruises in the Atlantic, Arctic, Southern, and Indian oceans. He is interested in abyssal flows in deep fractures of the submarine ridges, surface currents, equatorial undercurrents, operation with oceanographic equipment, and numerical modeling. He participated in adjusting a model of general circulation in the ocean to the currents in narrow deep fractures working together with the creators of the model at the Institute of Numerical Mathematics. He has publications in different scientific journals. He participated in several international assemblies including IAPSO, AOGS, and EGU.