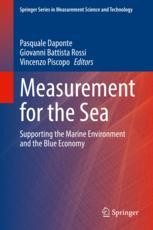 Measurement for the Sea

Supporting the Marine Environment and the Blue Economy

In the history of mankind, the sea has always played a key role as a privileged medium for communication, commerce and contact among population centers. It constitutes an essential ecosystem, and an invaluable reservoir and source of food for all living beings. Therefore, its heath is a critical challenge for the survival of all humanity, particularly as one the most important environmental components targeted by global warming. Measuring and monitoring techniques are key tools for managing the marine environment and for supporting the Blue Economy. With this perspective, a series of annual international events, entitled MetroSea (Metrology for the Sea, http://www.metrosea.org/ ) was begun in 2017. Their increasing success inspired this book, which provides an anthology of tutorials dealing with a representative selection of topics of concern to a broad readership.

The book covers two broad application areas, marine hydrography and meteorology, and then deals with instrumentation for measurement at sea. Typical metrological issues such as calibration and traceability, are considered, for both physical and chemical quantities. Key techniques, such as underwater acoustic investigation, remote sensing, measurement of waves and monitoring networks, are treated alongside marine geology and the monitoring of animal species. Economic and legal aspects of metrology for navigation are also discussed. Such an unparalleled wide vision of measurement for the sea will be of interest to a broad audience of scientists, engineers, economists, and their students.

He is Immediate Past Chair of the Italian Association on Electrical and Electronic Measurements, and Past President of IMEKO. He is member of: Working Group of the IEEE Instrumentation and Measurement Technical Committee N°10 Subcommittee of the Waveform Measurements and Analysis Committee, IMEKO Technical Committee TC-4 “Measurements of Electrical Quantities”, Editorial Board of Measurement Journal, Acta IMEKO and of Sensors. He is Associate Editor of IET Science Measurement & Technology Journal. He is member of the Board of Armed Forces Communications and Electronics Association (AFCEA) Naples Charter. He has organised some national or international meetings in the field of Electronic Measurements and European co-operation and he was General Chairman of the IEEE Instrumentation and Measurement Technical Conference for 2006, Technical Programme Co-Chair for I2MTC 2015. He was a co-founder of the IEEE Symposium on Measurement for Medical Applications MeMeA, now, he is the Chair of the MeMeA Steering Committee, memea2018.ieee-ims.org.

He is also the co-founder of the IEEE Workshop on Metrology for the Sea (www.metrosea.org), as well as of several other series of international workshops in various emerging application areas of Metrology.

He is involved in some European projects.

He has published more than 320 scientific papers in journals and at national and international conferences on the following subjects: Measurements and Drones, ADC and DAC Modelling and Testing, Digital Signal Processing, Distributed Measurement Systems.

- in 1987 from the Italian Society of Ophthalmology the award for the researches on the digital signal processing of the ultrasounds in echo-ophthalmology,

- in 2009 the Laurea Honoris Causa in Electrical Engineering from Technical University “Gheorghe Asachi" of Iasi (Romania),

- the “The Ludwik Finkelstein Medal 2014” from the Institute of Measurement and Control of United Kingdom,

- in 2015, in the framework of Florence Academic Leader Programme, the “Florence Ambassador Award”,

- in May 2018 the “Career Excellence Award” from the IEEE Instrumentation and Measurement Society “For a lifelong career and outstanding leadership in research and education on instrumentation and measurement, and a passionate and continuous service, international in scope, to the profession.”,

-  in 2020 AESS Outstanding Organizational Leadership Award “For contributions to metrology for aerospace applications”.

Giovanni Battista Rossi obtained the Diploma in classical humanities in 1974 from Liceo Classico Giuseppe Mazzini, Genoa, and received the Laurea degree (with first-class honours) in mechanical engineering from the University of Genoa, Italy, in 1981.

A certified engineer, he is currently full professor of measurement and instrumentation, with the University of Genoa. As a teacher, he has lectured for a national televised university teaching program (Nettuno). He has been coordinator of the M.Sc. course “Mechanical Engineering – Design and Construction” from 2011 to 2020 with the University of Genoa and is a member of the board of lecturers of the Ph.D. School of Mechanical Engineering. He has been a vice-chairman with the Department of Mechanics and Machine Design from 2002 to 2008. He is co-editor of the book Measurement with Persons (Taylor and Francis, 2012) and authored the book Measurement and Probability (Springer, 2014). He is co-editor of the series Measurement Science and Technology of Springer. He is an EU-recognised expert in measurement and testing and has recently chaired an expert group for the evaluation of the European Metrology Research Program and the European Metrology Program for Innovation and Research from 2016 to 2017. His current research interests include measurement science, probabilistic models and methods, dynamic measurement and spectral analysis, and measurement for the sea.

He has been chairman of Technical Committee 7 (Measurement Science) of the International Measurement Confederation (IMEKO) from 2012 to 2018 and was the Italian vice-representative of the General Council of IMEKO from 2011 to 2015, and has co-chaired international scientific events. He is currently a member of the Technical and Scientific Board of the Sea Study Centre, of the University of Genoa.

Vincenzo Piscopo is Associate Professor of “Ship constructions and marine plants” at the University of Naples “Parthenope”, Department of Science and Technology, since 28th December 2020, where he was also Assistant Professor (RTDb) since 28th December 2017 and Research Fellow (RTDa) since 4th January 2016. He also worked at the same University as postdoctoral researcher from 1st October 2012 up to 30th April 2015. At the end of December 2009, he obtained the Ph.D. in Aerospace, Naval and Quality Engineering at the University of Naples “Federico II”, where he also earned cum laude the master and bachelor’s degrees in Naval Engineering in July 2006 and July 2004, respectively. He is currently Editorial Board Member of the “International Journal of Naval Architecture and Ocean Engineering” and Associate Editor of the “IEEE Journal of Oceanic Engineering”.