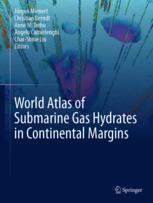 This world atlas presents a comprehensive overview of the gas-hydrate systems of our planet with contributions from esteemed international researchers from academia, governmental institutions and hydrocarbon industries. The book illustrates, describes and discusses gas hydrate systems, their geophysical evidence and their future prospects for climate change and continental margin geohazards from passive to active margins. This includes passive volcanic to non-volcanic margins including glaciated and non-glaciated margins from high to low latitudes. Shallow submarine gas hydrates allow a glimpse into the past from the Last Glacial Maximum (LGM) to modern environmental conditions to predict potential changes in future stability conditions while deep submarine gas hydrates remained more stable. This demonstrates their potential for rapid reactions for some gas hydrate provinces to a warming world, as well as helping to identify future prospects for environmental research. Three-dimensional and high-resolution seismic imaging technologies provide new insights into fluid flow systems in continental margins, enabling the identification of gas and gas escape routes to the seabed within gas hydrate environments, where seabed habitats may flourish. The volume contains a method section detailing the seismic imaging and logging while drilling techniques used to characterize gas hydrates and related dynamic processes in the sub seabed.

This book is unique, as it goes well beyond the geophysical monograph series of natural gas hydrates and textbooks on marine geophysics. It also emphasizes the potential for gas hydrate research across a variety of disciplines.

Observations of bottom simulating reflectors (BSRs) in 2D and 3D seismic reflection data combined with velocity analysis, electromagnetic investigations and gas-hydrate stability zone (GHSZ) modelling, provide the necessary insights for academic interests and hydrocarbon industries to understand the potential extent and volume of gas hydrates in a wide range of tectonic settings of continental margins. Gas hydrates control the largest and most dynamic reservoir of global carbon. Especially 4D, 3D seismic but also 2D seismic data provide compelling sub-seabed images of their dynamical behavior. Sub-seabed imaging techniques increase our understanding of the controlling mechanisms for the distribution and migration of gas before it enters the gas-hydrate stability zone. As methane hydrate stability depends mainly on pressure, temperature, gas composition and pore water chemistry, gas hydrates are usually found in ocean margin settings where water depth is more than 300 m and gas migrates upward from deeper geological formations. This highly dynamic environment may precondition the stability of continental slopes as evidenced by geohazards and gas expelled from the sea floor. This book provides new insights into variations in the character and existence of gas hydrates and BSRs in various geological environments, as well as their dynamics. The potentially dynamic behavior of this natural carbon system in a warming world, its current and future impacts on a variety of Earth environments can now be adequately evaluated by using the information provided in the world atlas.

This book is relevant for students, researchers, governmental agencies and oil and gas professionals. Some familiarity with seismic data and some basic understanding of geology and tectonics are recommended.

Jürgen Mienert is a Professor emeritus for Applied Geophysics and Arctic Marine Geology at UiT - The Arctic University of Norway, Tromsø.  He chaired the European Ocean Margin Research Consortium (OMARC) from 2003 to 2006, with a focus on better understanding the response of European margin systems to climate change. He led the UiT Department of Geology from 2008 to 2012, before receiving an award for establishing a Centre of Excellence by the Norwegian Research Council in 2012. He was founding Director of this CAGE, the Centre for Arctic Gas Hydrate, Environment and Climate from 2013 to 2017. His research focuses on understanding the rate at which rising ocean temperatures can destabilize shallow Arctic methane hydrate reservoirs leading to geohazards and methane release to the ocean and atmosphere. Jürgen received his PhD in geoscience from the Christian-Albrechts University (CAU) at Kiel, Germany (1985). He was awarded a DAAD fellowship for studying at LDGO – Lamont Doherty Earth Observatory of Columbia University, New York (1982) and was awarded a post-doctoral position at Woods Hole Oceanographic Institution, USA (1985-1988). He returned to Kiel in 1988 to join the newly established Centre for Marine Geosciences (GEOMAR) at the CAU, before moving to UiT -the Arctic University of Norway in Tromsø (1998). His collaboration with teams from Russia, USA, Canada and Europe on polar shelf and slope environments facilitated active cooperation among hydrocarbon companies, technology providers and Arctic research groups. His many sea expeditions include contributions to the Norwegian deep-water gas field “Ormen Lange” investigation, dives with Russian submersibles MIR from RV Keldysh (1998) to the deep ocean floor at the giant submarine “Storegga slide” on the Mid-Norwegian Margin and to natural gas release sites along the Barents-Svalbard margins, which have provided an indispensable guide for methane hydrate studies. He has authored and co-authored more than 200 papers published in peer-reviewed journals.
Christian Berndt is a Professor of Marine Geophysics at GEOMAR Helmholtz Centre for Ocean Research Kiel. Christian has a background in active source seismology. He has worked for the past twenty years on various aspects of fluid migration in sediment basins. These include the role of gas hydrates in the Earth system, hydrothermal systems caused by magmatic intrusions, and the links between pore fluids and slope stability. He has held academic positions in the U.S., Norway and the United Kingdom, and has led or participated in more than thirty research expeditions all over the world.

Angelo Camerlenghi is researcher in the ‘Geophysics’ Research Section of the National Institute of Oceanography and Applied Geophysics (OGS) and associate professor of Marine Geology at the University of Trieste. He holds a Master of Science in Geological Oceanography from Texas A&M University, College Station TX (1988) and a PhD in Earth Sciences from the University of Milano (1991). From 2004 to 2011 he was ICREA Research Professor at the University of Barcelona. His research is on ocean margins geology and geophysics, with a focus on polar margins, submarine geohazards, and manifestations of formation fluid circulation in marine sediments. His research  tightly relates to scientific ocean drilling. He has studied the geophysical evidence of marine gas hydrates on the South Shetland margin, Cascadia slope, West Svalbard and the mud volcano belt of the Eastern Mediterranean. His research is currently focused on the Mediterranean salt giant.

Anne M. Tréhu is a Professor of Geophysics in the College of Earth Ocean and Atmospheric Sciences at Oregon State University. She obtained her PhD from the MIT/WHOI Joint Program in 1982, where she specialized in ocean bottom seismometry and its application to seismicity and structure of plate boundaries. She has been interested in gas hydrates since she was introduced to them by Bill Dillon when she worked at the United States Geological Survey in Woods Hole, Massachusetts (1982-1987). She has been at Oregon State University since 1987, where her work on hydrates dovetails with her parallel interest in structures associated with subduction zone earthquakes since accretionary wedges provide a mechanism for methane to generate seafloor cold seeps and rich hydrate deposits.  In 2004, she was co-chief scientist of IODP Leg 204, which was dedicated to understanding the distribution and dynamics of gas hydrates associated with a structure named Hydrate Ridge on the continental margin offshore Oregon.  She has published ~150 articles, of which  approximately one third have had a focus on gas hydrates, and has participated in over 40 field expeditions, including one dive in Alvin and five expeditions using ROVs to explore and sample cold seeps and hydrates.

Char-Shine Liu is a Senior Researcher and CEO of the Ocean Center, National Taiwan University, and Professor Emeritus, Institute of Oceanography, National Taiwan University. During his Professor tenure, he also served as Director of the National Center for Ocean Research from 2003-2006 and Chairman of the Taiwan SCOR Committee from 2004-2009, among many other roles in his career. Char-Shine received his PhD in earth science from the Scripps Institution of Oceanography, University of California, San Diego, USA in 1983. He did 2-years (1983-1985) of postdoc work at Cornell University, New York, USA, followed by a 3-year stint as a geophysicist at then Standard Oil Company (now BP) in Dallas, Texas, USA, before returning to Taiwan in 1988. There he took an Associate Professor position at the Institute of Oceanography, National Taiwan University. He has broad research interests from active tectonics of the Taiwan arc-continent collision to marine seismic exploration, sea floor surveying and gas hydrate investigation. Char-Shine has collaborated with colleagues from USA, France, Germany and Japan on various research topics from tectonics of Taiwan to gas hydrate study. He has led geophysical investigation of the gas hydrate field offshore southwestern Taiwan since 2004, and has authored and co-authored more than 140 papers in scientific journals and special volumes.