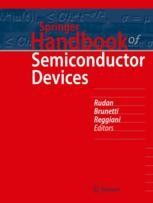 This Springer Handbook comprehensively covers the topic of semiconductor devices, embracing all aspects from theoretical background to fabrication, modeling, and applications.

Nearly 100 leading scientists from industry and academia were selected to write the handbook's chapters, which were conceived for professionals and practitioners, material scientists, physicists and electrical engineers working at universities, industrial R&D, and manufacturers.

Starting from the description of the relevant technological aspects and fabrication steps, the handbook proceeds with a section fully devoted to the main conventional semiconductor devices like, e.g., bipolar transistors and MOS capacitors and transistors, used in the production of the standard integrated circuits, and the corresponding physical models. In the subsequent chapters, the scaling issues of the semiconductor-device technology are addressed, followed by the description of novel concept-based semiconductor devices. The last section illustrates the numerical simulation methods ranging from the fabrication processes to the device performances.

Each chapter is self-contained, and refers to related topics treated in other chapters when necessary, so that the reader interested in a specific subject can easily identify a personal reading path through the vast contents of the handbook.

Massimo Rudan is Professor of Electronics at the University of Bologna. His research interests are in the field of physics of carrier transport and numerical analysis of semiconductor devices and solid-state sensors. He received a degree in Electrical Engineering in 1973 and a degree in Physics in 1976, both from the University of Bologna, Italy. In 1986 he has been a visiting scientist, on a one-year assignment, at the IBM Thomas J. Watson Research Center at Yorktown Heights, NY, studying the discretization techniques for the Boltzmann Transport Equation. In 1990 he became full professor at the University of Bologna. An IEEE Life Fellow, Massimo Rudan has coordinated several research projects funded by the European Commission, international Companies and Foundations, the National Council of Research, and the National Ministry of University and Research.

Rossella Brunetti is Professor of Condensed Matter Physics at the Department of Physics, Informatics and Mathematics of the University of Modena. Her research activity has mainly been focused on charge transport, in both semi-classical and quantum conditions, in semiconductor structures and devices. She received her Master degree cum laude in Physics in 1981, and the Ph. D. in Physics at the University of Modena, Italy, in 1987. Since 2002 she is associate professor at the same University. Rossella Brunetti has experience with a variety of numerical techniques which have been applied to validate theoretical models against experiments and to predict new effects. In the last years her research has focused on transport properties of chalcogenide materials in view of their applications in the field of emerging memory devices.

Susanna Reggiani is Professor at the School of Engineering of the University of Bologna. Her scientific activity has been devoted to the physics, modeling and characterization of electron devices, with special emphasis on transport models in semiconductors. She received the Ph.D. degree in Electrical Engineering from the University of Bologna in 2001. Since 2001 she is with the Department of Electronics and the Advanced Research Center for Electronic Systems (ARCES) of the same University. She has been involved in Projects dealing with TCAD analysis of power MOSFETs, modeling and characterization of hot-carrier stress degradation and reliability of wide-bandgap semiconductors, modeling of package influences on high-voltage ICs. In 2020 she became full professor.

“[T]his Handbook can be considered a milestone reference, since it covers a large spectrum of devices and surveys their structures and properties in depth. The Editors selected the topics cleverly, and the Contributors are specialized and outstanding scientists from all over the world. … I consider this Springer Handbook of Semiconductor De-vices the most important guide book for researchers, in industries and academic institutes, as well as graduate students.” (Chihiro Hamaguchi, Osaka University)

“Today certainly is the right time to launch this Springer Handbook on Semiconductor devices, considering the transition to the even more challenging post-scaling era. It provides comprehensive coverage of numerous technological and fabrication aspects of advanced semiconductor devices, focusing not only on advanced ‘traditional’ structures, but also on ingeniously new and often futuristic, beyond CMOS and More-than-Moore concepts for many applications. Rightly so, strong attention was paid to the indispensable advanced modeling and simulation methods for predictive and supporting purposes, as well as an outlook towards near or far future needs.. [It is]  an extensive, voluminous yet digestible standard work that deserves to be on the shelf of graduate students of nanoelectronics, researchers in academia and industry … looking for in-depth, up-to-date information.” (Herman E. Maes, Former VP imec, Leuven, Belgium)