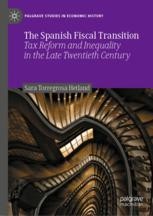 Tax Reform and Inequality in the Late Twentieth Century

This book provides an analysis of the process and outcomes of the tax reform, with a focus on progressivity, redistribution, and inequality. Between 1977 and 1986, Spain underwent a comprehensive tax reform which shaped its fiscal system until today. It was made in connection with the transition to democracy and indeed was understood as a fundamental part of the political change. The book situates the reform both within Spanish history and international trends in tax systems and connects it to the expansion of the welfare state and regional decentralization in Spain. The analysis reveals that the tax system failed to attain progressivity, and significant levels of fraud had a noticeable impact on inequality. Because of this, fiscal redistribution remained limited. In the new political economy of the second globalization, late democratic and fiscal transitioners were unable to emulate the path of the welfare state forerunners.

Sara Torregrosa Hetland is a researcher and lecturer at the Department of Economic History in Lund University, Sweden. She previously obtained a Degree in History from the University of Alicante and completed her Ph.D. in Economic History at the University of Barcelona (2016). Her main areas of work are the history of taxation, inequality, and public policies, in Western Europe and Latin America, from the late 19th century to the present.

“In this essential book, Sara Torregrosa transforms our perception of the tax reform of the Spanish democracy. She shows that, in the reality of tax collection, progressivity and tax fraud did not change so much as to reduce tax inequality and improve the distribution of income, after taxes and transfers. In this way, the book points towards a relative failure of the Welfare State in Spain.”

”Sara Torregrosa Hetland’s excellent book, The Spanish Fiscal Transition is an insightful study of the modern history of the Spanish tax system. But it is much more than that. This book explores the dilemmas and constraints that all modernizing states face when trying to build a comprehensive tax system in the context of an increasingly competitive and fluid international economy. This book also helps explain how and why the broad preferences of citizens are so difficult to achieve in Spain and, indeed, in virtually any country today. In short, this impressive monograph should be of interest to students of taxation and political economy as well as those interested in understanding why countries like Spain have such difficulty achieving their stated aims as they move into the 21st century. ”