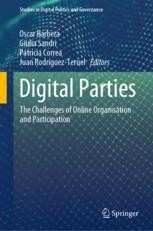 The Challenges of Online Organisation and Participation

This book analyzes how mainstream and new parties are building their digital platforms and transitioning from traditional (offline) organizations into the digital world.

The authors present an innovative empirical exploration of the democratic consequences and technical challenges of the digitalization of party organizations from a comparative perspective. They provide an original account of how party digital platforms are regulated and used, and a crucial discussion of the main technological and democratic issues that political parties face in their digital transition. Further, the authors assess the consequences of these digitalization processes for political participation and party membership, as well as the impact on party organizational models and electoral campaign potential. The book looks into one of the less-studied aspects of digital democracy, also presenting empirical evidence and case studies. It presents different parties and their adoption of digital participation platforms, from the Pirate Parties in Northern Europe to Podemos in Spain, La France Insoumise in France, the Five Stars Movement in Italy, or the German Greens.

Therefore, the book is a must-read for scholars of political science, policy-makers, and practitioners, interested in a better understanding of the transition of political parties into the digital world.

Oscar Barberà is an Associate Professor at the University of Valencia (Spain). His main areas of interest are party politics, decentralization, digitalization, and political elites both in Spain and Europe.

Giulia Sandri is an Associate Professor at the Catholic University of Lille (France). Her research focuses on party politics, digital politics, quality of democracy, and political behavior.

Patricia Correa is a Lecturer in Politics and International Relations at Aston University (Birmingham, UK). Her research focuses on political parties, activism, digitalization, and territorial politics.

Juan Rodríguez-Teruel is an Associate Professor at the University of Valencia (Spain).  His main areas of research are political elites, digitalization, and party politics.