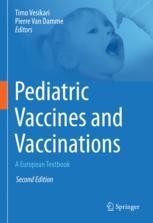 This second fully updated and extended edition of the textbook serves as a highly readable guide on latest developments in vaccine development and vaccination programs in infants, children and adolescents from a European perspective. The first part of the book introduces to general vaccinology, immunization programs and formulation, effects and unwanted effects of vaccines. The second and third part provide an overview on current viral and bacterial vaccines. The fourth and last part of this book discusses new vaccines in the pipeline and gives insights into safety and regulatory matters.

This second edition is extended by a whole new chapter on COVID-19 vaccines.

This book serves as a reference textbook in the field and helps to standardize the information on vaccines and immunization programs in the WHO European Region.
Alles zeigen
Über die Autor*innen

Professor Timo Vesikari, MD, PhD, is currently CEO of Nordic Research Network (NRN) company. He has been Director of Vaccine Research Center (VRC) at University of Tampere from 2004 to 2019. His previous positions with the University include Professor of Pediatrics (1981–1987) and Professor of Virology (1991–2012). Timo Vesikari has worked with World Health Organization in 1988–1990 and been a member of many WHO committees over the years.

Timo Vesikari is a specialist in pediatric infectious diseases with particular research interest in virology and viral vaccines. His research work has significantly contributed to the introduction of rotavirus vaccine into childhood vaccination programs worldwide and he has conducted many pivotal vaccine trials leading to the licensure and implementation of several other vaccines including live attenuated influenza vaccine, adjuvanted non-live influenza vaccine, varicella vaccine, varicella-MMR combinations and both live and non-live herpes zoster vaccines. He has published over 350 peer reviewed articles and co-edited a textbook on Pediatric Vaccines and Vaccinations (published 2017). Professor Vesikari’s current research interest is development of norovirus vaccines. He is a co-owner of a patent on a combined rotavirus VP6 and norovirus VLP vaccine.

Pierre Van Damme obtained his MD from the University of Antwerp, Belgium, in 1984. He received post-graduate degrees in health and economics, the evaluation of human corporal damage, and a master degree in occupational health. He obtained his PhD in epidemiology and social medicine in 1994, University of Antwerp. Since 1985 he has conducted more than 450 vaccine trials within the trial unit of the Centre for the Evaluation of Vaccination. He has been for more than 20 years a regular advisor for national and international organizations. He has been appointed as chairman of the European Technical Advisory Group of Experts on communicable diseases and vaccines for the WHO European Region (ETAGE) (2005-2015). He is a member of the Belgian Royal Academy of Medicine since 2008.

Pierre Van Damme has authored more than 500 peer-reviewed papers and is on the editorial board of several scientific journals that focus on the study of vaccines and vaccine-preventable infectious diseases. During his career Professor Van Damme was awarded numerous prestigious awards for outstanding scientific achievements.

Pierre Van Damme is currently full professor in Vaccinology at the University of Antwerp, Faculty of Medicine and Health Sciences where he is director of the Centre for the Evaluation of Vaccination, that he founded in 1994. This centre is part of the Vaccine & Infectious Disease Institute (VAXINFECTIO, University of Antwerp), he chaired from 2007 till 2018. His current research projects at the University are focused on the epidemiology and prevention of vaccine-preventable infectious diseases.
Alles zeigen