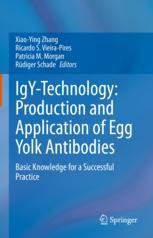 Basic Knowledge for a Successful Practice

This first edited Volume on IgY-Technology, addresses the historical and dynamic development of IgY-applications. The authors cover the biological basis and theoretical context, methodological guidance, and applications of IgY-Technology. A focus is laid on the use of IgY-antibodies for prophylactic/therapeutic purposes in human and veterinary medicine.

Aside from applications, the chapters also offer an evolutionary understanding of the IgY molecule, IgY receptors and practical prerequisites to produce IgY-antibodies. Guidance is given for every step of the process. Starting with an introduction to hens as a model species and including hen husbandry, hen egg-laying capacity and total IgY outcomes. Readers will also learn about immunization techniques, the advantages and limitations of different IgY extraction methods, as well as storage stability of the final product.

The last part of the volume highlights hands-on aspects of applications, such as IgY delivery strategies, new methods to produce monoclonal IgY-antibodies or production of functional IgY fragments by phage-display as well as commercial exploitation of the technology. Thus, this book is a valuable resource and guide for Scientists, Clinicians and Health Product Developers in both human and veterinary medicine.

Ricardo S. Vieira-Pires is an Assistant Investigator at the Center for Neuroscience and Cell Biology (CNC), University of Coimbra, Portugal. He obtained his PhD in Structural Biology (2008) at University Joseph Fourier, Grenoble, France. He is head of the Structural Biotechnology Group that studies proteins and molecular assemblies involved in key processes of bacterial and viral infectious diseases. He is particularly interested in targeting microbial surface-exposed virulent factors using antibodies. He is head of the CNC – Avian Technological Unit that explores bird immune repertoires for antibody discovery. He is engaged with academic and industry partners promoting IgY Technology-based solutions for human and veterinary medicine.

Patricia M. Morgan is an Emerita Senior Lecturer at the National University of Ireland Galway (NUI Galway). Having been awarded a PhD in Biochemistry at NUI Galway, she undertook post-doctoral research at the University of Wisconsin-Madison, USA in the areas of reproductive biology and endocrinology.  She has held senior positions at NUI Galway as Dean of the College of Science and Dean of Graduate Studies.  In these posts, she has championed research developments within the University particularly in the areas of Biotechnology and Innovation. She has served on various national committees promoting science and is an advocate for the public understanding of science and the promotion of inclusion and diversity in academia.

Rüdiger Schade started his scientific career at the Institute of Pharmacology, Charité – Universitätsmedizin in Berlin, Germany, in 1976. Since the early 1990’s, his research has been strongly focused on the development, production and application of IgY antibodies. His contributions significantly influenced the field of IgY-technology and promoted the application of this technology worldwide, particularly in Latin-America. In acknowledgement of his research efforts, he received the FISEA prize – the International Foundation for the Substitution of Animal Experimentation, Luxemburg - in 1997.
Alles zeigen