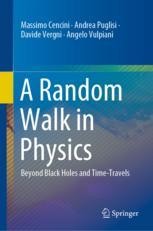 A Random Walk in Physics

Beyond Black Holes and Time-Travels

This book offers an informal, easy-to-understand account of topics in modern physics and mathematics. The focus is, in particular, on statistical mechanics, soft matter, probability, chaos, complexity, and models, as well as their interplay. The book features 28 key entries and it is carefully structured so as to allow readers to pursue different paths that reflect their interests and priorities, thereby avoiding an excessively systematic presentation that might stifle interest. While the majority of the entries concern specific topics and arguments, some relate to important protagonists of science, highlighting and explaining their contributions. Advanced mathematics is avoided, and formulas are introduced in only a few cases. The book is a user-friendly tool that nevertheless avoids scientific compromise. It is of interest to all who seek a better grasp of the world that surrounds us and of the ideas that have changed our perceptions.

Massimo Cencini graduated in Physics from the Sapienza University of Rome in 1996 and gained his Ph.D. there in 2000. He then became a postdoc at the Max Planck Institute for Complex Systems in Dresden and at the Observatory of Nice. Currently, he is senior researcher at the Institute of Complex Systems of the National Research Council in Rome, where he works since 2008. His scientific interests include chaos and complexity in dynamical systems, statistical theories of turbulence, and turbulent transport. In recent years, he has also become interested in theoretical population dynamics. Dr. Cencini has written about 90 scientific papers in international peer-reviewed journals and a monograph on chaos and dynamical systems.

Andrea Puglisi graduated from Sapienza University of Rome in 1998 and gained a Ph.D. in Physics in 2002. Then, he has been a Marie Curie fellow at Orsay, Paris (2003–2004) and a postdoc at Sapienza University (2005–2008). He is senior researcher at the Institute of Complex Systems of the National Research Council in Rome (CNR-ISC), where he works since 2008. His interests are granular materials (theory and experiments), non-equilibrium statistical mechanics, and computational cognitive science. He has co-authored more than 100 scientific papers on international journals and one book: Transport and Fluctuations in Granular Fluids (Springer 2014).

Davide Vergni graduated in Physics from the Sapienza University of Rome in 1997 and gained his Ph.D. there in 2001. He is currently a senior researcher at the Institute for Calculus Applications "Mauro Picone" of the National Research Council of Italy, and since 2015 he is a member of the technical-scientific board of experts at the Department of the Treasury. His scientific interests lie within applied mathematics, in particular reactive systems in heterogeneous media, population dynamics, combinatorial aspects in bioinformatics, and management and optimization in financial systems (public debt, pension funds, energy market). He has co-authored more than 50 scientific publications, including peer-reviewed papers in international journals, book chapters, and proceedings.

Angelo Vulpiani graduated from Rome University in 1977, where his supervisor was Gianni Jona-Lasinio. He subsequently became a CNR fellow (1978–1981), Assistant Professor at Rome University (1981–1988), and Associate Professor at first the University of L’Aquila (1988–1991) and then the University of Rome (1991–2000). At present, he is Professor of Theoretical Physics in the Physics Department of Sapienza University of Rome and a fellow of the Institute of Physics. He has been a visiting fellow at several research institutes and universities in France, Belgium, Sweden, Denmark, and the USA. His scientific interests include chaos and complexity in dynamical systems, statistical mechanics of non-equilibrium and disordered systems, developed turbulence, phenomena of transport and diffusion, and foundations of physics. He has written about 250 scientific papers in international journals and nine books, including most recently Reductionism, Emergence and Levels of Reality (Springer, 2014; co-authors: S. Chibbaro and L. Rondoni).