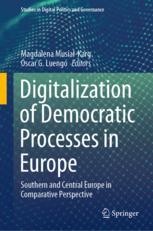 Digitalization of Democratic Processes in Europe

This book explores the digital transformations of democracy and democratic societies. It examines the various challenges posed by these transformations in the context of political practice and to theoreticians of democracy and political communication.
The authors present studies from different countries, related to various effects of digitalization processes. Topics covered include, but are not limited to: Innovation in civil society research, new forms of civic participation, new dimensions of democratization and local governance processes, political changes and public participation, civic and political activities, political campaigning or other phenomenon driven by the implementation of information and communications technology (ICT) into politics.
Therefore, the book is a must-read for all scholars and researchers of political science, practitioners, and policy-makers, interested in a better understanding of digital politics, digitalization processes, and democracy in general.

Magdalena Musiał-Karg is an associate professor at the Department of Political Systems, Faculty of Political Science and Journalism, Adam Mickiewicz University in Poznań, Poland. Her main research interests focus on direct democracy and the impact of modern technologies (ICT) on democratic systems, mainly on the electoral process (e-voting). She has also conducted research on the role of women in public space. M. Musiał-Karg is the author of numerous publications devoted to electronic participation, alternative voting methods, and direct democracy.She was a holder of a PhD scholarship under the "Europa Fellows II" Programme financed by the German Federal Ministry of Education and Research and under the Osteuropa Programme financed by KAAD. In 2014, she was awarded with a 3-year stipend for young distinguished scientists funded by the Polish Minister of Science and Higher Education.She is the Vice-Dean for Research and Scientific Cooperation at the Faculty of Political Science and Journalism, Adam Mickiewicz University in Poznań, and a former Vice-Dean for Research and Development (2016-2020). She is also the Vice-President of the Polish Political Science Association, member of the Political Sciences Committee of the Polish Academy of Sciences (2020-2023), and the President of the Center for European Research and Education.