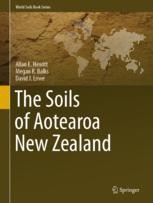 The Soils of Aotearoa New Zealand

This book offers an introduction to the soils of Aotearoa New Zealand, structured according to the New Zealand soil classification system.  Starting with an overview of the importance and distribution of New Zealand soils, it subsequently provides essential information on each of the 15 New Zealand soil orders in separate chapters. Each chapter, illustrated with diagrams and photographs in colour, includes a summary of the main features of the soils in the order, their genesis and relationships with landscapes, their key properties including examples of physical and chemical characteristics, and their classification, use, and management. The book then features a chapter on soils in the Ross Sea region of Antarctica and concludes by considering New Zealand soils in a global context, soil-formation pathways, and methods used in New Zealand to evaluate soils and assist in land-management decisions. Information about how to access detailed information via links to the Manaaki Whenua Landcare Research website is also included.

Allan E. Hewitt was born in Akaroa, a descendant of the French settlers who arrived in the 1830s. His early years were spent on a hill farm at Pigeon Bay. The family resettled onto the Canterbury plains, firstly to Ashburton where the farm is now a public amenity called “Trott’s Garden”, then to Greenpark. Allan completed a BSc(Hons) degree in geology at Canterbury University, then a DipAgSci at Lincoln University. After five years as a pedologist with the DSIR Soil Bureau he was awarded an NRAC scholarship to study at Cornell University, upstate New York, where he completed his PhD in agronomy in 1982. On returning to New Zealand, Allan was given the sole responsibility of developing a soil classification system specific to New Zealand. This took 10 years. The rest of his career as team leader, Senior Pedologist, and Research Leader, in Manaaki Whenua Landcare Research in Otago then Canterbury, used his visionary and innovative skills to help lead soils research. He played a key role in the development of S map, New Zealand’s spatial soil information system. Allan served a term as President of the New Zealand Society of Soil Science (NZSSS) and is a Fellow of the NZSSS. He is also a recipient of the NZSSS Mike Leamy Award and was a Norman Taylor Memorial Lecturer. In 2019, Lincoln University awarded him the Bledisloe Medal, acknowledging his outstanding contributions to soil science and for advancing New Zealand’s interests. Allan is a skilled large format landscape painter, sometimes using soil as a medium.

Megan R. Balks was brought up on a hill country farm in the north Wairarapa. She completed a BSc(Hons) in soil science at Massey University and a PhD at the University of Waikato. Megan worked as a soil scientist in DSIR, Dunedin, mainly on soil survey work for irrigation development in Central Otago, for three years.  She then taught soil and environmental sciences at the University of Waikato for 30 years, including two terms as Chairperson of the Department of Earth and Ocean Sciences. Megan’s research interests have been wide ranging including irrigation of effluent to land, pedology, and applied soil physics. She has been involved in Antarctic Research for over 30 years, including undertaking 19 Antarctic fieldtrips, many as field leader. Megan currently serves on the ITPS (Intergovernmental Technical Panel for Soils) where she represents New Zealand, Australia, and the Southwest Pacific. Megan has served on the Council, and is currently President, of the New Zealand Society of Soil Science.  She has also served two terms on the Waikato Conservation Board and two terms on the Board of the QEII National Trust. Megan is a recipient of the NZSSS Norman Taylor Memorial Lecture Award and a Fellow of the NZSSS. Megan, with her husband Errol, has a small sheep farm on the slopes of Mt Pirongia where she gains hands-on experience in endeavouring to sustainably manage a small piece of New Zealand’s soil resource.

David J. Lowe, although born in Waipukurau, the son of a veterinarian, grew up in Tauranga from the age of one.  He undertook his BSc, MSc, and PhD degrees at the University of Waikato in Hamilton, being an early graduate in the new integrative discipline of Earth sciences developed by foundation staff John McCraw, Michael Selby, and Harry Gibbs. During his formative student years David transformed carbon-bearing samples into benzene in the fledgling radiocarbon dating laboratory at Waikato University (1975-76), undertook soil description work for Soil Bureau DSIR (Hamilton) in the Matamata County survey (1977-78), and sledged and mapped in the Britannia Range in Antarctica (1978-79).  David’s masterate thesis was in pedology, the study of soils in the landscape, and his PhD was in tephrochronology, the characterisation or ‘fingerprinting’ of volcanic-ash layers – tephras – and their use in dating geological, climatic, and archaeological events. He has combined pedology and tephrochronology (‘tephra’ providing the nexus) in his teaching and wide-ranging research interests at Waikato University for ~40 years. David’s research topics include the origins and unique properties of tephra-derived soils and paleosols, dating tephras and evaluating volcanic eruption histories and hazards, explaining why altered-tephra deposits may collapse as landslides, climatic change over millennia, and the timing of Polynesian settlement of New Zealand. His team was the first to develop a method to extract and purify DNA from ancient buried paleosols on tephras, and he is currently leading research using liquefied ash-layers in lakes to evaluate prehistoric earthquake history in the Hamilton lowlands. David, current Team Leader of Earth sciences in the School of Science, served for several years as Chair of Earth and Ocean Sciences, and has co-led tephra studies globally as an officer of the International Focus Group on Tephrochronology and Volcanism for 16 years, including four as President. He represented New Zealand on the International Council, International Union for Quaternary Research (INQUA), for 12 years. David is a recipient of the NZSSS Norman Taylor Memorial Lecture Award and the Mackay Hammer Award of the Geoscience Society of New Zealand. He is a Fellow of NZSSS, INQUA, and the Royal Society of New Zealand Te Apārangi.