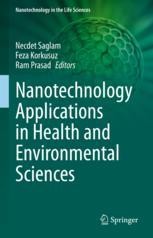 Nanoscience and nanotechnologies are leading to a major point to our understanding of nature. Nanotechnology can be generally defined as creation and use of nano-sized systems, devices, and structures which have special functions or properties because of their small size.
This volume on Nanotechnology Applications in Health and Environmental Sciences focuses on biotechnological and environmental applications of nanomaterials. It covers popular and various nanomedical topics such as oncology, genetics, and reconstructive medicine. Additionally, many chapters give leading-edge information on nano-sensor applications and usage in specific disciplines. Also, two chapters on novel subjects have been included on Lantibiotics and microbiota. This book should be useful for nanotechnologists, microbiologists, and researchers interested in nanomedicine and nano-biotechnology, as well as environmental nanotechnology.

Necdet Saglam graduated from Faculty of Science, Department of Biology, Hacettepe University, Ankara, Turkey. Between 1991-2010, he worked as an Associated Professor and Professor in Faculty of Education, Department of Biology, Hacettepe University. During the years between 2007 and 2011, he has become Rector of Aksaray University, Aksaray, Turkey. He has worked as a Professor for 10 years in Division of Nanotechnology and Nanomedicine, Graduate School of Science and Engineering, Hacettepe University, Ankara, Turkey. He has joined a number of academic committees and duties such as chair, editor, referee; and was Vice Dean of Education Faculty, Hacettepe University form 1997 to 2006. He has supervised a number of graduate theses on science education and science fields. At present, he teaches Nanotechnology, Nanomedicine, Biotechnology, Microbiology and Genetics and in these subject areas, he has joined several research project teams. He has published many articles and chapters in esteemed journals and books also presented papers at international conferences.

Feza Korkusuz graduated from Medical Faculty, Ankara University, Ankara, Turkey in 1986. He attended specification in Orthopedic Surgery in Traumatology at Department of Orthopedic Surgery and Traumatology, Medical Faculty, Gazi  University. Between 1989 and 1990, he studied at Department of Orthopaedic Surgery, Faculty of Medicine, Osaka University, Japan and he graduated from Osaka University with a postgraduate diploma. His clinical and research studies focused on Spine Surgery, Sports Medicine and Basic Research. He has worked at Middle East Technical University, Ankara, Turkey for 20 years as an orthopedic surgeon at the Medical Center as the Director and Head of Department of Physical Education and Sports. In 1994 and in 2001 he became an Associate Professor and Professor, respectively. In the year 2000, he received the Scientific and Technological Research Council of Turkey Promotion Award in Medical Sciences. Between 1991 and 2016, he was a member of the Orthopaedic Research Society. In 2008, he became an active member of the Association of Bone and Joint Surgeons, and since 2006, he has been a member of the corresponding and deputy editor of Clinical Orthopaedics and Related Research. Since 2017, he has became an active member of the Turkish Academy of Sciences and has worked as a vice president in the Scientific and Technological Research Council of Turkey (TUBITAK).