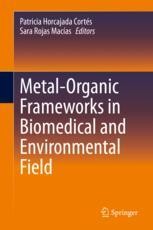 This book joins an international and interdisciplinary group of leading experts on the biomedical, energy and environmental applications of Metal-Organic Frameworks (MOFs). The resulting overview covers everything from the environmentally friendly and scale up synthesis of MOFs, their application in green energy generation and storage, and water purification to their use as drug delivery systems, biosensors, and their association with relevant macromolecules (genes, enzymes).

This book is focused on the interest of MOFs in applications such as the leading –edge environmental (energy-related) and biomedical fields. The potential of MOFs in these areas is currently progressing at a fast pace, since the wide possibilities that MOFs offer in terms of composition, topology, incorporation of active species (in their porosity, on their external surface or within the framework), and post-synthetic modifications, among others. The aim here is to provide future research goals that emphasize relevant nuances to this class of materials as a whole.

Patricia Horcajada Cortés is a scientist at the IMDEA Energy Foundation in Madrid, Spain. She has been involved in the material field for more than 15 years, focusing on hybrid porous materials. She has conducted research on all major aspects of this field, which includes synthesis and characterization of porous materials, shaping, and adsorption. With an unconventional and multidisciplinary scientific background (Pharmacy BCs, 2001 and Material science PhD, 2005), she joined the Institut Lavoisier, first as a postdoctoral researcher and later, in 2007, as civil servant researcher of the French Scientific Research Council (CNRS), initiating a totally new field: the biomedical application of Metal-Organic Frameworks (MOFs). Dr. Horcajada is considered one of the pioneers in the field of porous hybrid solids and their application in biomedicine. Within the context of a “Ramon y Cajal” contract and a Marie Curie AMAROUT II fellow, she was appointed as Senior Researcher in IMDEA Energy in February 2016. She heads the Unit of Advanced Porous Materials, which deals with the development of new multifunctional materials for strategic applications in energy, environment and health, among other areas.

She has authored 7 book chapters, 9 patents, and 138 publications. With an H^120 articles in fist quartile journals with high impact factors (i.e., Nature Mater., Chem. Rev., Angew. Chem., J. Am. Chem. Soc.) and a high number of citations (>17000 citations), with over 2000 citations per year in the last five years and more than 2400 citations in 2019. In this sense, 36 articles have been cited more than 100 times, according to data taken from the WoS in August 2020. She has participated in >110 conferences (including 21 invited lectures and 4 plenaries).

Her national and International collaborations have included 66 highly multidisciplinary projects (38 National, 8 European, 4 International) and 6 industrial contracts, coordinating 1 International, 8 European and 18 National projects, together with 1 industrial contract. She has an extensive experience supervising students at different levels (14 PhD-7 in progress, 22 postdocs, 14 MSc, 15 final degrees, 4 technicians, 30 undergraduated) and is a member of the Editorial board of Scientific Reports. She has been awarded with prestigious prizes: “Young Researchers Leading Groups” from Spanish Royal Society of Chemistry (2020), “Miguel Catalán for Young researcher <40 years old” (2016) and “Scientific Excellence Prize CNRS” (2011-2014).

Sara Rojas Macías obtained her PhD in the University of Granada-UGR with her thesis being titled “Synthesis and characterization of porous coordination polymers with drug delivery purposes”. During her PhD, Dr. Rojas performed two scientific investigations in the University of Saint Andrews (Scotland), under the supervision of Dr. Russell Morris, and in the Institut Lavoisier in Versailles (France), under the supervision of Drs. Christian Serre and Patricia Horcajada. After finishing her PhD, she continued as postdoctoral researcher at the UGR. In 2016, she obtained the prestigious grant Marie Curie Individual Fellow to develop porous materials for the treatment of intoxications at the Institute Lavoisier in Versailles (France). In 2018, she obtained the “Atracción del Talento” grant awarded form the Comunidad de Madrid in order to develop her investigation at the Advanced Porous Materials unit in the IMDEA Energy institute (Móstoles-Madrid, Spain). Very recently, she was awarded with the “Juan de la Cierva Incorporación” grant to join the Biochemistry and Electronics as Sensing Technologies (BEST) group in the UGR. Her job is focused on the development of porous materials for energy, environmental and biomedical applications. Dr. Rojas is coauthor of 16 scientific papers, published in high-impact international journals, a book chapter and a patent. Finally, she has participated in different scientific congresses presenting 9 oral and 25 posters communications.