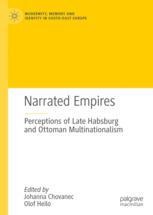 This book examines the role of imperial narratives of multinationalism as alternative ideologies to nationalism in Central and Eastern Europe, the Balkans, and the Middle East from the revolutions of 1848 up to the defeat and subsequent downfall of the Habsburg and Ottoman empires in 1918. During this period, both empires struggled against a rising tide of nationalism to legitimise their own diversity of ethnicities, languages and religions. Contributors scrutinise the various narratives of identity that they developed, supported, encouraged or unwittingly created and left behind for posterity as they tried to keep up with the changing political realities of modernity.
Beyond simplified notions of enforced harmony or dynamic dissonance, this book aims at a more polyphonic analysis of the various voices of Habsburg and Ottoman multinationalism: from the imperial centres and in the closest proximity to sovereigns, to provinces and minorities, among intellectuals and state servants, through novels and newspapers. Combining insights from history, literary studies and political sciences, it further explores the lasting legacy of the empires in post-imperial narratives of loss, nostalgia, hope and redemption. It shows why the two dynasties keep haunting the twenty-first century with fears and promises of conflict, coexistence, and reborn greatness.

Johanna Chovanec is a doctoral fellow of the Austrian Academy of Sciences and the German Academic Scholarship Foundation at the Department of Comparative Literature, University of Vienna, Austria.

Olof Heilo is Deputy Director at the Swedish Research Institute in Istanbul, Turkey, and a visiting lecturer at the Centre for Middle Eastern Studies in Lund, Sweden.

“This much-welcomed volume undertakes for the first time to provide a comparative perspective on late Habsburg and Ottoman imperial legacies. Exploring a variety of distinct forms of modern narratives, the book convincingly reclaims the multi-layered past and presence of the two empires and their multi-confessional and multi-cultural societies. An important and engaging book.”—Nadia Al-Bagdadi, Central European University, Budapest “A lucid book that engages complex themes, this is a sophisticated analysis unpacking the social and political legacies of the Habsburg and Ottoman empires.  The book offers a compelling, in-depth comparative analysis of how both empires respectively tried to reconcile the challenges of nationalism. With a well-structured counterpoint of bottom-up and top-down interactions, Chovanec and Heilo have produced the ideal compendium for understanding the history of empires, weaving throughout crisp yet subtle intellectual considerations underlying the intersections of modernity, empire, and nationalism.”—M. Hakan Yavuz, University of Utah, USA
“The dissolution of the Ottoman and Habsburg empire have been told and compared numerous times. Why would we need another volume? The editors and contributors to this volume make a novel claim to examine imperial identities, forms of belonging, and the reorganization of rule through the narratives of empire, the ideologies embedded in narratives and the various ways in which they branched out to accommodate political transformations. The chapters in this volume bring to light the end of imperial rule and the beginning of national states in subtle and sophisticated analyses that uncover new meaning behind old trajectories. This volume will certainly be a prized addition to the work on these two empires.”—Karen Barkey, University of California, Berkeley, USA
“Distressed by the rise of national socialism in Germany, the French poet Paul Claudel looked at the multinational nature of the Austro-Hungarian empire as a possible remedy for the dangers of nationalism. There is no doubt that the Ottoman experience too would have offered him much food for thought. By looking comparatively at both the Ottoman and Habsburg empires, this volume makes an insightful contribution to the debates on (post-)imperial identities and cultures between centres and peripheries. Engaging with the literary heritage of the two empires, the book brings to the fore the intrinsic relation between literary and political narratives.”—Laurent Mignon, University of Oxford, UK
“The contributions to this important volume offer a wealth of new insights into ideologies and policies that the Habsburg and Ottoman empires developed as they faced the challenge of ethnolinguistic nationalisms during the long nineteenth century. The authors also reveal how local actors engaged with Habsburg dynastic patriotism and Ottomanism, and transformed them to fit their own agendas.”—Rok Stergar, University of Ljubljana, Slovenia

“How do empires narrate their changing political circumstances and ideologies in the crush of real time? When post-imperial peoples gaze back into the mists of those bygone empires, what do they see? This volume answers these questions through a set of deeply engaging, empirically rich, multidisciplinary, and theoretically suggestive chapters about two of history’s most diverse and consequential empires.”

“This is a wonderful collection of studies that illuminates the Habsburg and Ottoman cases in new ways by placing them in dialogue with each other, showing multiple ways that we can close the breach between the two historiographies. Despite all of their differences – of language, religion, and political structure – the histories of both empires benefit from being seen through the lens of the other. Specialists in both empires will have epiphanies about their own and the other empire in reading the contributions herein. This will surely be a generative work for a field still in its infancy.”

“Language matters. This is particularly true for multinational empires and, even more so, for this fine volume, in which multi-faceted perspectives on the late Habsburg and the late Ottoman empires are brought into a productive dialogue. The impressive range of topics is nicely integrated by the overarching theme of narrated empires and the well-informed introduction. This edited volume is full of thought provoking insights into langue, narratives, and empires.”
—Peter Becker, University of Vienna, Austria
Alles zeigen