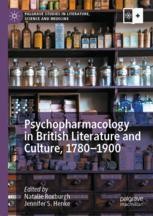 Psychopharmacology in British Literature and Culture, 1780–1900

This collection of essays examines the way psychoactive substances are described and discussed within late eighteenth- and nineteenth-century British literary and cultural texts. Covering several genres, such as novels, poetry, autobiography and non-fiction, individual essays provide insights on eighteenth- and nineteenth-century  understandings of drug effects of opium, alcohol and many other plant-based substances. Contributors consider both contemporary and recent medical knowledge in order to contextualise and illuminate understandings of how drugs were utilised as stimulants, as relaxants, for pleasure, as pain relievers and for other purposes. Chapters also examine the novelty of experimentations of drugs in conversation with the way literary texts incorporate them, highlighting the importance of literary and cultural texts for addressing ethical questions.

Natalie Roxburgh is Lecturer and Research Fellow in English Literary Studies at the University of Siegen, Germany. She has published widely on a variety of topics—such as science, economics and politics—from the seventeenth century to the present, including a monograph titled Representing Public Credit: Credible Commitment, Fiction, and the Rise of the Financial Subject (2016).

Jennifer S. Henke is Assistant Professor at the University of Bremen, Germany. Her publications include topics ranging from Shakespeare in film to science and posthumanism. She is the author of the monograph Unsex Me Here (2014), and her second book deals with medicine and the pregnant female body in eighteenth-century literature and culture.

“The readership of this book will be as vast as the interests in drug history. … these are highly enjoyable essays, which, interestingly enough, provoke some sense of inebriation comparable to the object of their study. … a work to be enjoyed piece by piece, as a mental delight.” (Alain Touwaide, Doody's Book Reviews, March 5, 2021)

“This book provides valuable historical and artistic context for understanding today’s opioid epidemic by showing how literary writers thought about drugs in the eighteenth and nineteenth centuries. The contributing scholars focus not on the poets’ and fiction writers’ own drug use but on the writers’ beliefs about how drugs--especially opium--influenced human brains according to the scientific and medical knowledge of their times. The individual case studies reveal not just how medical knowledge can shape literary forms but how humankind’s ongoing relationship with drugs is continually redefined by art and culture.” (Laura Otis, Samuel Candler Dobbs Professor of English, Emory University, USA)

“This remarkable book offers an intersectional grouping of essays which analyse the psychopharmacological knowledges of the eighteenth and nineteenth centuries in cultural texts of the era. Multiple perspectives in medical humanities, literature, and science script an intriguing new story around these knowledges. The complex relational boundaries between our gendered bodies and our drugs are embedded in their historical contexts and the often ambiguous nature of psychoactive substances. Readers interested in the intertwined strands of science and culture will profit from spending some time with these insightful essays.” (Donald Bruce, Professor, School of Languages and Literatures, University of Guelph, Canada)

“This pioneering study of drug effects, not just addiction, in the nineteenth century ranges from opium to alcohol, lavender water, wormwood, and other herbal substances. Roxburgh and Henke have done a service for the fields of both medical humanities and literature and science by revealing the important role literary and cultural texts played in making possible the emergence of psychopharmacology in the next century.” (Jay Clayton, William R. Kenan Professor and Director of the Curb Center, Vanderbilt University, USA)

“This collection offers useful consideration of the history of late-eighteenth- and nineteenth-century pharmacology; its essays suggest all kinds of possibilities for new conversations about medical science and the literary imagination.” (Adam Colman, author of Drugs and the Addiction Aesthetic in Nineteenth-Century Literature (Palgrave Macmillan 2019))