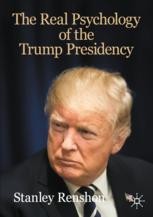 The Real Psychology of the Trump Presidency

The United States has never had a president quite like Donald J. Trump. He violated every rule of conventional presidential campaigns to win a race that almost no one, including at times he himself, thought he would win. In so doing, Trump set off cataclysmic shock waves across the country and world that have not subsided and are unlikely to as long as he remains in office. Critics of Trump abound, as do anonymously sourced speculations about his motives, yet the real man behind this unprecedented presidency remains largely unknown. In this innovative analysis, American presidency scholar and trained psychoanalyst Stanley Renshon reaches beyond partisan narrative to offer a serious and substantive examination of Trump’s real psychology and controversial presidency. He analyzes Trump as a preemptive president trying to become transformative by initiating a Politics of American Restoration. Rigorously grounded in both political science and psychology scholarship, The Real Psychology of the Trump Presidency offers a unique and thoughtful perspective on our controversial 45th president.

Stanley Renshon is Professor of political science at Lehman College and The Graduate Center, CUNY, and a certified psychoanalyst. He is the author of over 100 professional articles and 18 books in the areas of presidential psychology and leadership, immigration and American national identity, and American foreign policy.

“This highly instructive and engaging new book presents an empirically grounded psychological assessment of Donald Trump’s presidential leadership and governance. The argument that Trump seeks to achieve the politics of American restoration is developed with evidence-based analysis, which systematically discusses the leadership qualities needed to attain this goal as well as the challenges they pose. The careful research and clear writing make an enduring contribution to understanding the American presidency and American politics in the twenty-first century.”

“In psyhoanalyst Stanley Renshon’s insightful new study of Donald Trump, he carefully sifts the evidence for clues as to whether the president will be a ‘fading flash’ or a successful reconstructive president. His persuasive nonpartisan conclusion: it would be unwise to place a large bet against President Trump.”

“This is a wide-ranging work that brings together several strands of political science, including party polarization, regime cycles, presidential character, and psycho-biography. Renshon shatters the often unreflective conventional wisdom surrounding this president, acknowledging his weaknesses while also taking seriously his political goals and the foundations of his popular support. Instead of one-dimensional caricatures of Trump and his followers, Renshon provides a rich intermix of character study, historical context, and political critique. In the end, Trump’s rise is closely tied to the failures of the political class and its assumptions and orthodoxies, with Trump representing a concerted attempt to bring about the ‘Politics of American Restoration.’ This book is essential reading for anyone desiring a more nuanced understanding of the Trump presidency and of the president himself.”

“Trump’s leadership and the Trump phenomenon have needed serious, noncartoon-like analysis from a scholar who understands both the country and the personality of America’s unusual 45th president. Dr. Renshon provided it, in readable, illuminating fashion.”

“Donald John Trump may be the most anti-establishment, disruptive and perplexing president since Andrew Jackson. His critics pounce on his utterances and at rallies his supporters celebrate his actions and statements. In this book, Stanley A.Renshon critically reviews what has been written about his first term and provides a thought-provoking, compelling and fresh analysis of the man, his rhetoric, and policies. It is indeed a fascinating reading. For those readers who like to highlight sentences in provocative books, you will find much to underline and quote.”

“Stanley Renshon offers a systematic and pungent challenge to the wide range of critics of Donald Trump, the man and the President. He and the framework he offers see capabilities where others see close to madness, as Trump offers his own reconstruction of the American presidency designed toward the restoration of the nation to greatness. This is a most provocative book for the 2020 election year.”

“Fascinating. Having interviewed six American presidents and known some of them very well, traveling with them for months on end and visiting with them alone for hours and days at a time, it is stunning to me to see how Stanley Renshon can capture so much from their public lives.