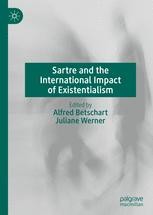 Sartre and the International Impact of Existentialism

This edited collection re-examines the global impact of Sartre’s philosophy from 1944-68. From his emergence as an eminent philosopher, dramatist, and novelist, to becoming the ‘world’s conscience’ through his political commitment, Jean-Paul Sartre shaped the mind-set of a generation, influencing writers and thinkers both in France and far beyond.

Exploring the presence of existentialism in literature, theatre, philosophy, politics, psychology and film, the contributors seek to discover what made Sartre’s philosophy so successful outside of France. With twenty diverse chapters encompassing the US, Europe, the Middle East, East Asia and Latin America, the volume analyses the dissemination of existentialism through literary periodicals, plays, universities and libraries around the world, as well as the substantial challenges it faced.

The global post-war surge of existentialism left permanent traces in history, exerting considerable influence on our way of life in its quest for authenticity and freedom. This timely and compelling volume revives the path taken by a philosophical movement that continues to contribute to the anti-discrimination politics of today.

Juliane Werner is a research fellow and lecturer in the Department of Comparative Literature at the University of Vienna, Austria. She has recently worked and published on the cultural transfer of existentialism and on various aspects of philosophical fiction.

Buchtitel
Sartre and the International Impact of Existentialism
Herausgeber
Copyright
2020
Verlag
Palgrave Macmillan
Copyright Inhaber
The Editor(s) (if applicable) and The Author(s), under exclusive license to Springer Nature Switzerland AG