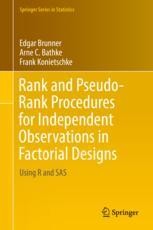 Rank and Pseudo-Rank Procedures for Independent Observations in Factorial Designs

This book explains how to analyze independent data from factorial designs without having to make restrictive assumptions, such as normality of the data, or equal variances. The general approach also allows for ordinal and even dichotomous data. The underlying effect size is the nonparametric relative effect, which has a simple and intuitive probability interpretation. The data analysis is presented as comprehensively as possible, including appropriate descriptive statistics which follow a nonparametric paradigm, as well as corresponding inferential methods using hypothesis tests and confidence intervals based on pseudo-ranks.

Offering clear explanations, an overview of the modern rank- and pseudo-rank-based inference methodology and numerous illustrations with real data examples, as well as the necessary R/SAS code to run the statistical analyses, this book is a valuable resource for statisticians and practitioners alike.

Edgar Brunner is Professor Emeritus at the University of Göttingen, Germany and Visiting Professor at the University of Salzburg, Austria. In Göttingen, he was the Head of the Department of Medical Statistics from 1976 to 2009 and lectured at the Medical and Mathematics Faculties. Prof. Brunner has published numerous papers in high-quality journals, and has taught and given invited lectures on four continents. His research areas include rank methods; simultaneous confidence intervals; high-dimensional repeated measures; statistical methodology; and the application of rank methods for the analysis of diagnostic trials. Prof. Brunner has also collaborated with numerous authors from various countries and is honorary member of the German Region board of the International Biometric Society (IBS-DR). From 2004 to 2008, he was editor of the Biometrical Journal, and he was associate editor of JSPI from 2000 to 2011. Since 2009, he has been associate editor of the Biometrical Journal.

Arne C. Bathke is a Professor of Statistics at the Department of Mathematics of the University of Salzburg, Austria. Previously, he was Director of Graduate Studies at the Department of Statistics and Director of the Applied Statistics Laboratory at the University of Kentucky, USA. Prof. Bathke has taught courses and given invited lectures on five continents. His methodological research is mainly in the areas of nonparametric statistics and multivariate inference. Furthermore, he has collaborated with subject matter scientists from a wide range of fields. He has received university-wide teaching awards from the University of Kentucky: the Provost's Award for outstanding teaching (2007) and the Alumni Association Great Teacher Award (2012). He was also named “Henry Clay Ambassador” by the Mayor of Lexington (KY) for his civil engagement, and he was commissioned “Kentucky Admiral” by the Secretary of the Kentucky Energy and Environment Cabinet. He is a member of the board of the Austrian Statistical Association (ÖSG) and the advisory board of the International Biometric Society – Region Österreich-Schweiz (IBS-ROeS), and he is also associate editor for various international statistics journals (International Journal of Biostatistics, Journal of the American Statistical Association, and Statistical Papers).

Frank Konietschke studied mathematics at the Georg August University of Göttingen, Germany. Since obtaining his Ph.D., he has been working as a postdoctoral researcher at the Department of Medical Statistics at the University of Göttingen, and as Assistant Professor at the University of Texas / Dallas. He has taught courses and given invited lectures across North America and Europe, as well as in Ethiopia and China. His methodological research is mainly in the areas of nonparametric and bootstrap / resampling strategies and inferences. He received the Hoeffding Award from the American Statistical Association in 2009, the “GMDS-Förderpreis” from the German Society for Medical Informatics, Biometry and Epidemiology (GMDS) in 2010 and the Gustav Adolf Lienert Award from the German region board of the International Biometric Society in 2012.