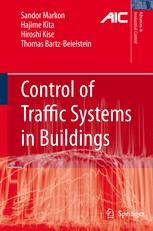 Control of Traffic Systems in Buildings

Transportation systems in buildings are part of everyday life: whether ferrying people twenty storeys up to the office or moving luggage to the airport check-in, 21st-century man relies on them.

Control of Traffic Systems in Buildings presents the state of the art in the analysis and control of transportation systems in buildings focusing primarily on elevator groups. The theory and design of passenger traffic and cargo transport systems are covered, together with actual operational examples and topics of special current interest such as:

• simulation-based modeling of passengers and goods;

• proposal for a benchmark to compare new control methods;

• deployment and testing of transportation systems.

Special attention is given to the techniques and uses of simulation and a working simulator is included that allows readers to explore the subject for themselves.

The safe running of such automated traffic systems, though vital, gets rather taken for granted but workers in elevator control have pioneered the development of many modern control systems for employment in all sorts of traffic and scheduled systems being among the first to realize the potential of techniques like fuzzy logic, neural networks and genetic algorithms. For this reason, this exposition of recent work in in-building transport control will be of considerable interest to researchers and engineers in many areas of control, particularly those working in optimal or supervisory control, urban transportation systems and intelligent transport systems as well as to those directly interested in the elevator control systems under discussion.

Sandor Markon has 25 years experience as a designer, researcher and manager dealing with control systems with major elevator manufacturers. He is also active in publishing papers and abstracts in related fields. He has been involved in the installation of four generations of elevator systems in buildings world-wide. The current volume would gathers that knowledge together with that of other researchers currently scattered in short articles, patent disclosures, etc., into one place.