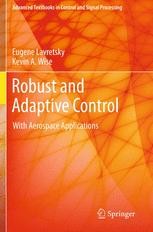 Robust and Adaptive Control shows the reader how to produce consistent and accurate controllers that operate in the presence of uncertainties and unforeseen events. Driven by aerospace applications the focus of the book is primarily on continuous-dynamical systems.

The text is a three-part treatment, beginning with robust and optimal linear control methods and moving on to a self-contained presentation of the design and analysis of model reference adaptive control (MRAC) for nonlinear uncertain dynamical systems. Recent extensions and modifications to MRAC design are included, as are guidelines for combining robust optimal and MRAC controllers. Features of the text include:

·         case studies that demonstrate the benefits of robust and adaptive control for piloted, autonomous and experimental aerial platforms;

·         detailed background material for each chapter to motivate theoretical developments;

·         realistic examples and simulation data illustrating key features of the methods described; and

The theoretical content and practical applications reported address real-life aerospace problems, being based on numerous transitions of control-theoretic results into operational systems and airborne vehicles that are drawn from the authors’ extensive professional experience with The Boeing Company. The systems covered are challenging, often open-loop unstable, with uncertainties in their dynamics, and thus requiring both persistently reliable control and the ability to track commands either from a pilot or a guidance computer.

Readers are assumed to have a basic understanding of root locus, Bode diagrams, and Nyquist plots, as well as linear algebra, ordinary differential equations, and the use of state-space methods in analysis and modeling of dynamical systems.

Robust and Adaptive Control is intended to methodically teach senior undergraduate and graduate students how to construct stable and predictable control algorithms for realistic industrial applications. Practicing engineers and academic researchers will also find the book of great instructional value.

Eugene Lavretsky is a Boeing Senior Technical Fellow, at the Boeing Research & Technology in Huntington Beach, CA. During his career at Boeing, Dr. Lavretsky has developed flight control methods, tools and processes for transport aircraft, advanced unmanned aircraft, and weapon system programs. Highlights include the MD-11 aircraft, NASA F/A-18 Autonomous Formation Flight and High Speed Civil Transport aircraft, JDAM guided munitions, and X-45 J-UCAS. His research interests include robust and adaptive control, system identification and flight dynamics. He has written over 90 technical articles, and has taught control courses at the California Long Beach State University, Claremont Graduate University, California Institute of Technology, University of Missouri Science and Technology, and at the University of Southern California. Dr. Lavretsky is an Associate Fellow of AIAA and a Sr. Member of IEEE. He is the recipient of the AIAA Mechanics and Control of Flight Award, (2009).

Kevin A. Wise is a Boeing Senior Technical Fellow, at the Boeing Phantom Works, Saint Louis, Missouri. During his career at Boeing, Dr. Wise has developed vehicle management systems, flight control systems, and control system design tools and processes for several advanced unmanned aircraft and weapon system programs. Highlights include the hydrogen-powered Phantom Eye High Altitude Long Endurance (HALE)UAV, Laser-JDAM (in production), X-45A J-UCAS, X-36 RESTORE, Miniaturized Munitions Technology Demonstrator, 4th Generation Ejection Seat (first ever supersonic ejection), JDAM (in production), Army Short Range UAV, and the HAVE SLICK missile. His research interests include intelligent autonomy, aircraft and missile dynamics and control, robust adaptive control, optimal control, and robustness theory. He has authored more than 70 technical articles, and has taught graduate level control theory since 1987 at Washington University in St. Louis, Southern Illinois University at Edwardsville, and at the University of Missouri Science and Technology. Dr. Wise is a Fellow of the IEEE and an Associate Fellow of the AIAA. He is the recipient of the IFAC Control Engineering Practice Award, (2007), and the AIAA Mechanics and Control of Flight Award, (2004).

“Robust and adaptive control is a well written and self-contained book, driven by aerospace applications. This book is very rich in both control theory and examples. … the authors succeed in establishing a good trade-off between theoretical background and developments and practical aspects related to flight system applications. The book can be used as a textbook for senior undergraduate students, graduate students, practicing engineers and academic researchers. It is recommended to all major libraries.” (Ali Zolghadri, Mathematical Reviews, July, 2014)