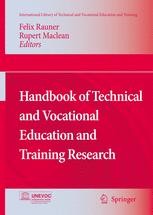 Handbook of Technical and Vocational Education and Training Research

Technical and vocational education and training (TVET) research has become a recognized and well-defined area of interdisciplinary research. This is the first handbook of its kind that specifically concentrates on research and research methods in TVET.

The book’s sections focus on particular aspects of the field, starting with a presentation of the genesis of TVET research. They further feature research in relation to policy, planning and practice. Various areas of TVET research are covered, including on the vocational disciplines and on TVET systems. Case studies illustrate different approaches to TVET research, and the final section of the book presents research methods, including interview and observation methods, as well as of experimentation and development.

This handbook provides a comprehensive coverage of TVET research in an international context, and, with special focus on research and research methods, it is a cutting-edge resource and reference.