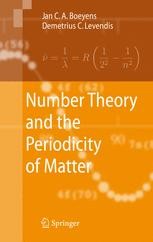 Number Theory and the Periodicity of Matter

Philosophers have long speculated that a link exists between natural numbers and the physical world...

Pythagoras:
"...all is number"

Prout’s hypothesis, published anonymously in 1815:
"...the elements are different aggregates of the atoms of primordial hydrogen..."

Within this book, readers with an interest in mathematics, science or natural philosophy will find this expectation addressed...

"The book launch was held at the University of Pretoria (UP) on 26 March 2008. … It’s a fascinating and original concept and I hope you all get the opportunity to read it. It will challenge your current views of numbers. … If there is a link between numbers and the Periodic Table this will of course have major implications as to the ‘meaning’ on the Periodic Table. It’s great to have original thinkers in our midst!" (South African Chemical Institute Newsletter, Issue 3, 2008)

"Some people believe that there exist links between the natural numbers and the physical world. This … book looks for such links in what the authors call ‘the periodicity of matter.’ Readers with an interest in mathematics, science, or natural philosophy will find the book useful … . it is aimed at researchers working on various branches of physics who might find it interesting to find related ideas in number theory. … can be of interest to mathematicians, physicists and chemists." (Soheila Emamyari and Mehdi Hassani, MathDL, May, 2008)

"This remarkable book will be found interesting by scholars whose expertise lies in one or more of the following disciplines: philosophy, applied mathematics, theoretical, nuclear, and elementary particle physics, as well as physical, theoretical, and mathematical chemistry. … the book Number Theory and the Periodicity of Matter is an exciting and nonstandard feat in the study of Nature. … is recommended to the readers of MATCH Communications in Mathematical and in Computer Chemistry. Yet, its the main readers should be nuclear physicists." (Ivan Gutman, MATCH Communications in Mathematical and in Computer Chemistry, Vol. 60, 2008)

"The authors discuss connections between number and matter and write about primes and the golden ratio somehow underlying nuclear physics. This book learnedly summarizes much scientific knowledge and history (mathematics, chemical physics, nuclear physics, cosmology), and may thus serve some readers independently of its main project. Summing Up: Recommended. Upper-division undergraduates and up." (D. V. Feldman, Choice, Vol. 46 (2), October, 2008)

"This is a book of special interest for particle physicists and chemists. … this is a recommendable and interesting book." (H. Zimmermann, Crystallography Reviews, May, 2009)

"The current volume has been written for readers at diverse levels of scientific and mathematical education as well as an exceptionally wide range of interests in natural phenomena. … the current book a valuable contribution to one’s library." (Joel F. Liebman, Molecular Crystals and Liquid Crystals, Vol. 503, June, 2009)