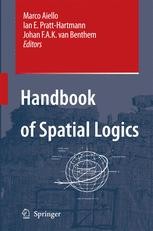 A spatial logic is a formal language interpreted over any class of structures featuring geometrical entities and relations, broadly construed. In the past decade, spatial logics have attracted much attention in response to developments in such diverse fields as Artificial Intelligence, Database Theory, Physics, and Philosophy. The aim of this handbook is to create, for the first time, a systematic account of the field of spatial logic. The book comprises a general introduction, followed by fourteen chapters by invited authors. Each chapter provides a self-contained overview of its topic, describing the principal results obtained to date, explaining the methods used to obtain them, and listing the most important open problems. Jointly, these contributions constitute a comprehensive survey of this rapidly expanding subject.

“Logics of space, in one guise or another, have been studied for many decades. However, recently there has been a vigorous development in this area, stimulated by new applications in Computer Science and Artificial Intelligence, and more broadly by new attitudes to Logic which these disciplines have helped to foster. The Handbook of Spatial Logics will surely be a landmark publication, both defining the field, and providing a superb resource for students and researchers, specialists and visitors alike.” Samson Abramsky, Strachey Professor of Computing, Oxford

“Logic has been the language of choice for the study of Space since the days of Euclid's Elements. The alliance of Logic and Space has produced an enormous synergy that has both redefined these fields and deeply influenced the way we do science. Contemporary Logic--with its new, exciting tools--continues this tradition in a robust fashion, as well as adding prominent dynamic and information components to the mix. This Handbook covers the extensive, amazing new developments in spatial reasoning. It has the potential to revolutionize the field in much the same way that Analytic Geometry and Group Theory did in their time.” Sergei N. Artemov, Distinguished Professor of Computer Science, Mathematics, and Philosophy New York

“The geometry and dynamics of space has motivated much mathematics, but the logic of spatial concepts has spawned a relatively modest literature to date, in contrast also to the logic of time. This prodigious volume changes that picture significantly. It provides a wealth of fascinating material that will be of wide interest from formal, physical and philosophical perspectives. Many of its chapters are substantial monographs in their own right. The book will stimulate further research into ideas that are fundamental to our understanding of the world around us.” Robert Goldblatt, Professor of Mathematics, Victoria University of Wellington

“This collection redraws boundaries in an imaginative way. There is a common theme through all the fifteen chapters, namely that they all report interesting recent work on how to represent spatial arguments within limited formalisms. But this is hindsight; the original motivations were widely different, ranging from image processing to foundations of physics, and from computational complexity to whole-part structures. Besides making available many things that deserve to be better known, the book invites us to find the logical viewpoint that unifies them.” Wilfrid Hodges, School of Mathematical Sciences, Queen Mary, University of London

“Logics of time have been developed over several decades. Logics of space promise to be much harder, and this book contains many promising attempts, some of which will have applications to artificial intelligence, especially to robotic manipulation of solid objects.” John McCarthy, Department of Computer Science, Stanford University

“The problem of precisely understanding the relationship between spatial and logical structure has been an outstanding issue in logic, philosophy, and mathematics since at least the time of Immanuel Kant. The Logic of Space provides an up-to-date and accessible introduction to the current state of discussion of this problem in the light of recent work in logic and computer science.” Michael Friedman, Department of Philosophy, Stanford University

"The editors deserve congratulations for commissioning and brining together top-notch contribution on a wide variety of concern in philosophy, logic, and computing science under the rubric of spatial logic. The idea of grouping together several papers on a subfield has worked very well. The index seems adequate, and I can’t think of my aspect of the subject that has been left out. Apart from being a reference, this handbook also serves to cover the entire field of spatial logics." (K. Lodaya, Computing Reviews, January, 2008)

“Publishing a handbook like the present one is without doubt a very deserving achievement. … Many leading experts could be won as contributors so that a high-level and fascinating work accrued, being frequently along the lines of a golden thread through space. The well edited book is divided into fifteen chapters … . the work tends to be a readable textbook … .” (Bernhard Heinemann, Zentralblatt MATH, Vol. 1172, 2009)