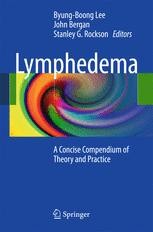 A Concise Compendium of Theory and Practice

Lymphedema: A Concise Compendium of Theory and Practice brings into one volume the most important sources of information to guide the evaluation and treatment of patients with lymphedema. The management of chronic lymphedema continues to challenge both patients and treating physicians worldwide. In the past decades, however, substantial progress has been achieved for both diagnosis and therapy of these disabling conditions. With increasing attention to the quality of life, this debilitating life-long disease is receiving more attention not only by lymphedema specialists, but also by clinicians across the spectrum of health care delivery. Lymphedema: A Concise Compendium of Theory and Practice provides clear, concise background and recommendations in an easy-to-use format. It is a valuable reference tool for clinical practitioners (physicians/nurse practioners/technicians) who wish to deliver state-of-the-art health care to their patients with lymphatic and venous disorders.

Professor B.B. Lee began his career as a founding member of the transplant and vascular surgery program at Georgetown University, Washington, D.C. He is now better known as a leading vascular surgeon in the field of veno-lymphatic disorders in the U.S. and a world authority on congenital vascular malformation and lymphedema.

Prof. Lee, a disciple of the late David Hume of the Medical College of Virginia (Richmond, Virginia), has also made far-reaching contributions in the field of transplant surgery. During his tenure at Johns Hopkins University as clinical professor of surgery, he established a world-class living-related liver transplantation program in Seoul, Korea, as the founding professor and chairman of the Surgical Sciences department at Samsung Medical Center and Sungkyunkwan University.

In recognition of his contributions to vascular surgery, Prof. Lee was named Distinguished Fellow by the Society for Vascular Surgery in the U.S. He has published more than 600 original papers and abstracts in addition to dozens of book chapters, mainly in the field of vascular malformation and lymphedema. He has also given more than 400 lectures around the world.

Prof. Lee was recently invited by the Royal Society of Medicine and the American College of Phlebology Foundation to contribute as guest editor to a special issue of Phlebology on venous malformation. He was also asked to contribute a new chapter on AV malformation to the new edition of the Handbook of Venous Disorders by the American Venous Forum. Most notably, he was invited by the Journal of Vascular Surgery editorial board to write the vascular malformation chapter for Rutherford's Vascular Surgery, which remains the leading textbook for vascular surgeons around the world.

Prof. Lee has served as president or vice president on many national and international societies, including the IUA (International Union of Angiology) and IUP (International Union of Phlebology). He has been elected to honorary as well as emeritus member status by numerous phlebology and lymphology societies throughout the world. Until recently, he has led the IUP as Vice President, boosting its image through his outstanding academic contributions and successfully organizing consensuses on Primary Lymphedema as well as Venous Malformation.

Prof. Lee is currently serving on the ISVS (International Society of Vascular Surgery) as Vice President for North America and Chairman of the Membership Committee.   Reelected to the American Board of Phlebology as a director, Prof. Lee promotes this new specialty throughout the U.S.

Dr. John Bergan is a distinguished vascular surgeon and respected teacher who has held appointments at the University of California, San Diego School of Medicine, the Uniformed Services University of the Health Sciences in Bethesda, Maryland and Loma Linda University.  He is a Chaired Professor Emeritus at Northwestern University Medical School in Chicago.

Dr. Bergan completed his secondary education in South Bend, Indiana, attended Yale University, graduated from Purdue University,   and received his medical degree from the Indiana University School of Medicine.  He completed his surgical residency at the Northwestern University Medical School.  At Northwestern, he pursued a career in arterial surgery and organ transplantation. Dr. Bergan was the founder and first Chief of the Division of Vascular Surgery at Northwestern University Medical School in Chicago. The Post Graduate Vascular training program there became the model for subsequent Fellowships approved by the American Board of Surgery.

After 1972, Dr. Bergan worked with Dr. James Yao in development of the noninvasive laboratory at Northwestern University Medical School.  He was the principle founder of the Midwestern Vascular Surgery Society and the American Venous Forum.  His teaching of vascular surgery was rewarded by the Rovsing Silver Medal of the Danish Surgical Society, the Hach Silver medal of the German Phlebologic Society and honorary memberships in the Royal College of Surgeons in England, the Vascular Society of Great Britain & Ireland, the Vascular Surgery Section of the Royal Australasian College of Surgeons, the American College of Phlebology and many others.  In total, he has been awarded more than 30 honorary memberships in surgical societies throughout the world.

Dr. Bergan has served as President of the Society for Vascular Surgery, the European American Venous Symposium, the American Venous Forum, the International Association of Vascular Surgeons, the Chicago Surgical Society, the Gulf Coast Vascular Society, and the Southern California Vascular Surgical Society.  He has also served as a member of the editorial boards of all of the major surgical and vascular journals such as the Journal of Vascular Surgery, Annals of Vascular Surgery, Surgery and the British Journal of Surgery. Dr. Bergan founded The Venous Digest and the International Venous Digest, a scientific publication that is translated into seven languages and distributed worldwide.
He has published over 800 papers and has edited or co-edited over 40 books on vascular and lymphatic conditions.

Dr Rockson is the Allan and Tina Neill Professor of Lymphatic Research and Medicine at Stanford University School of Medicine.  After earning his medical degree from Duke University School of Medicine in Durham, North Carolina, Dr Rockson completed his internship and residency training in internal medicine at the Peter Bent Brigham Hospital of Harvard Medical School, in Boston, Massachusetts, and fellowship training in the cardiac unit of Massachusetts General Hospital, Harvard Medical School.  He is a fellow of the American College of Cardiology, American College of Angiology, and American College of Physicians, as well as a member of the International Society of Lymphology, American Society of Internal Medicine, the Society of Vascular Medicine and Biology, and the Paul Dudley White Society, among others. As a principal investigator or co-investigator, he has been involved in numerous clinical trials researching various aspects of lymphatic disease, vascular biology and cardiovascular medicine. His basic research involves the investigation of mechanisms of lymphangiogenesis and the identifications of biomarkers for lymphatic disease.

As a Professor of Medicine, Dr. Rockson serves concurrently as the Stanford’s Chief of Consultative Cardiology and the Director of the Stanford Center for Lymphatic and Venous Disorders.

Dr Rockson is Editor-in-Chief of Lymphatic Research and Biology and sits on the editorial board of Angiology.  He has been a frequent invited lecturer at national and international meetings, congresses, and societies both here and abroad. He is the Founding Chair of the Scientific Advisory Board of the Lymphatic Research Foundation and has served as Chair of the inaugural Gordon Research Conference entitled ‘Molecular Mechanisms in Lymphatic Function and Disease’.