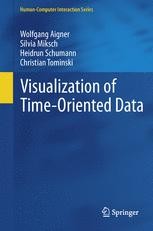 Time is an exceptional dimension that is common to many application domains such as medicine, engineering, business, science, biography, history, planning, or project management. Understanding time-oriented data enables us to learn from the past in order to predict, plan, and build the future. Due to the distinct characteristics of time, appropriate visual and analytical methods are required to explore and analyze them.

This book starts with an introduction to visualization and a number of historical examples of visual representations. At its core, the book presents and discusses a systematic view of the visualization of time-oriented data. This view is structured along three key questions. While the aspects of time and associated data describe what is being visualized, user tasks are related to the question why something is visualized. These characteristics and tasks determine how the visualization is to be designed. To support visual exploration, interaction techniques and analytical methods are required as well, which are discussed in separate chapters. The concepts explained in this book are illustrated with numerous examples.

A large part of this book is devoted to a structured survey of existing techniques for visualizing time and time-oriented data. Overall, 101 different visualization techniques are presented on a per-page basis; each of these self-contained descriptions is accompanied by an illustration and corresponding references.  This survey serves as a reference for scientists conducting related research as well as for practitioners seeking information on how their time-oriented data can best be visualized in order to gain valuable insights.

There is no doubt about the importance of visualization in data analysis, whether for examining the unknown and suggesting novel approaches to explore, for confirming yet-to-be-proved hypotheses and abandoning future dead ends, or just for supporting someone’s ideas with visual aids in a presentation. In most situations, the data being analyzed includes a temporal dimension whose proper treatment might boost (or bust) the resolution of a given data analysis task. Hence a systematic treatise on the visualization of time-oriented data is welcome.

Four researchers from Vienna University of Technology in Austria and the University of Rostock in Germany have compiled this extensive catalog of visualization techniques where the temporal dimension plays a major role. Their book contains one-page descriptions of 101 different ways to represent the temporal dimension of data in two or three dimensions. The catalogued techniques include literally dozens of different ways to plot time series. Some have been devised for highlighting parallelisms among different time series when analyzing multivariate data, whereas others were designed for bringing the periodic nature of time into the spotlight. Many of them have been incorporated into data visualization tools for making efficient use of the limited screen real estate and some allow for the visualization of spatiotemporal data, where appropriate. The page devoted to each technique is beautifully illustrated with a relevant diagram or screen shot. Each page also includes a concise textual description of the rationale behind the technique under analysis and, almost as a footnote, the most pertinent bibliographic reference (in rare occasions, a handful of them).

The survey of visualization techniques comprises the second half of this nicely illustrated book. The first half tries to cover the intellectual foundation behind the visualization techniques themselves. A short introduction familiarizes us with the reasons behind the use of data visualization tools, that is, why we might need them and how they can support interactive data analysis. The introduction also describes how they are designed as visualization pipelines and the different reference models that have been proposed to describe their essence. A pleasant historical account of the evolution of the pictorial representation of time, from statistical charts to different artistic movements, paves the way for a more technical overview of how time is modeled in information systems to “reflect the phenomena under consideration and support the analysis task at hand.”

The visualization aspects are covered first, followed by the interaction and analytical support that current data visualization tools provide. With respect to data visualization, techniques are structured around three simple questions that also help categorize the 101 techniques in the survey: What? Why? How? The data to be represented (what) and the user tasks that must be supported (why) determine the visual representation mechanism (how). Some examples are given to illustrate the proper solution of data visualization problems, from ways to highlight the periodicity in temporal data to the different color- coding strategies that should be used to support different tasks (the same color scheme is not suitable for identification, localization, and comparison, for instance).

This book also includes a couple of chapters on features that every data visualization tool should support. The first of these chapters, on interaction, describes user intents, conceptual and technical considerations that should be taken into account, and methods such as direct manipulation, brushing & linking, or dynamic queries, as well as the use of event-based visualization. The second chapter, on analytics, merely touches the surface of a growing field, which deserves a much more elaborate treatment.