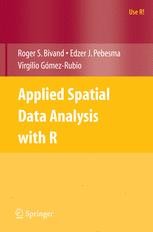 Applied Spatial Data Analysis with R is divided into two basic parts, the first presenting R packages, functions, classes and methods for handling spatial data. This part is of interest to users who need to access and visualise spatial data. Data import and export for many file formats for spatial data are covered in detail, as is the interface between R and the open source GRASS GIS. The second part showcases more specialised kinds of spatial data analysis, including spatial point pattern analysis, interpolation and geostatistics, areal data analysis and disease mapping. The coverage of methods of spatial data analysis ranges from standard techniques to new developments, and the examples used are largely taken from the spatial statistics literature. All the examples can be run using R contributed packages available from the CRAN website, with code and additional data sets from the book's own website.

This book will be of interest to researchers who intend to use R to handle, visualise, and analyse spatial data. It will also be of interest to spatial data analysts who do not use R, but who are interested in practical aspects of implementing software for spatial data analysis. It is a suitable companion book for introductory spatial statistics courses and for applied methods courses in a wide range of subjects using spatial data, including human and physical geography, geographical information systems, the environmental sciences, ecology, public health and disease control, economics, public administration and political science.

The book has a website where coloured figures, complete code examples, data sets, and other support material may be found: http://www.asdar-book.org.

The authors have taken part in writing and maintaining software for spatial data handling and analysis with R in concert since 2003.

"The first half of this book certainly convinced me that some extra effort in organizing my data into certain spatial class structures makes the analysis easier and less subject to mistakes. I also admit that I found it very interesting and I learned a lot. Several years ago, I struggled on a project that required managing various spatial data with different projections and support using the rgdal package in R; I really wish I had this book at that time!... In summary, this is an excellent book that should be on the shelf of any applied statistician who is analyzing spatial data using R.…, [I]t would be a valuable companion to any course that uses spatial packages in R." (Jay M. Ver Hoef, Biometrics, June 2009, 65)

"Applied Spatial Data Analysis with R is an accessible text that demonstrates and explains the handling of spatial data using the R software platform. The authors have all been key contributors to the R spatial data analysis community, and the range of their contributions is evident from the comprehensive coverage of this work. It will appeal to those familiar with R but not spatial data, and vice versa, as well as those proficient in both and in search of a reference text.… In short, this book is highly recommended to statisticians and geographers interested in plotting and analyzing spatial data." (James Cheshire, Significance September 2009)

“I would highly recommend instructors, students, and researchers to have this text on their bookshelf. This book is an enrichment for the community of people conducting research in spatial statistics. It provides tools for simple spatial problems as well as for cutting edge research problems. The book is priced reasonably relative to its content. Overall, it is an excellent reference book.” (The American Statistician, May 2010, Vol. 64, No. 2)

“This book constitutes a complete and accessible manual dedicated to the use of R for handling spatial data. … the book will appeal equally to beginners and to experts in the field of spatial data analysis. … As a summary, I strongly recommend this book to any person who needs to study the behaviour of one or several geo-referenced variables. … It certainly gives a good and quite exhaustive overview to the different techniques available in order to characterize spatial data.” (Didier Renard, Mathematical Geosciences, Vol. 43, 2011)