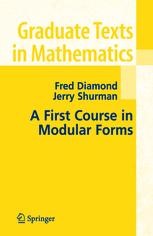 A First Course in Modular Forms

This book introduces the theory of modular forms with an eye toward the Modularity Theorem:All rational elliptic curves arise from modular forms.

The topics covered include
• elliptic curves as complex tori and as algebraic curves,
• modular curves as Riemann surfaces and as algebraic curves,
• Hecke operators and Atkin–Lehner theory,
• Hecke eigenforms and their arithmetic properties,
• the Jacobians of modular curves and the Abelian varieties associated to Hecke eigenforms,
• elliptic and modular curves modulo p and the Eichler–Shimura Relation,
• the Galois representations associated to elliptic curves and to Hecke eigenforms.
As it presents these ideas, the book states the Modularity Theorem in various forms, relating them to each other and touching on their applications to number theory.A First Course in Modular Forms is written for beginning graduate students and advanced undergraduates. It does not require background in algebraic number theory or algebraic geometry, and it contains exercises throughout.Fred Diamond received his Ph.D from Princeton University in 1988 under the direction of Andrew Wiles and now teaches at King's College London. Jerry Shurman received his Ph.D from Princeton University in 1988 under the direction of Goro Shimura and now teaches at Reed College.
Alles zeigen
Stimmen zum Buch

“The textbook under review provides a modern introduction to the theory of modular forms, with the aim to explain the modularity theorem to beginning graduate students and advanced undergraduates. … Written in a very comprehensible, detailed, lucid and instructive manner, this unique textbook is widely self-contained and perfectly suitable for self-study by beginners. … an excellent guide to the relevant research literature … . experts and teachers will get a lot of methodological inspiration from the authors’ approach, and many useful ideas for efficient teaching.” (Philosophy, Religion and Science Book Reviews, bookinspections.wordpress.com, June, 2013)

"It has always been difficult to start learning about modular forms. … we were still lacking a textbook that could be honestly described as both comprehensive and accessible. Diamond and Shurman’s First Course is a largely successful attempt to provide just such a book. … A First Course in Modular Forms is a success. … a course taught from this text would be a very good way to lead students into the area. … I expect that Diamond and Shurman’s book would serve very well." (Fernando Q. Gouvêa, MathDL, February, 2007)

"An essentially self-contained treatment that readers will find valuable both as a reference and a pedagogical text. ... The authors of FCMF are to be commended for producing a valuable addition to the literature which belongs on the shelf of all scholars with an interest in modular forms, modular curves and their arithmetic applications." (Henri Darmon, Mathematical Reviews, Issue 2006 f)

"The aim of this book is to introduce the reader to the modularity theorem. … This book can be recommended to everyone wishing to learn about modular forms and their connections to number theory." (J. Mahnkopf, Monatshefte für Mathematik, Vol. 146 (4), 2006)

"The … goal of Diamond (Brandeis Univ.) and Shurman (Reed College) is … to state the modularity conjecture in some of its many forms. … readers wishing eventually to read Wiles could hardly find a better place to start than this. … Summing Up: Highly recommended. General readers; upper-division undergraduates through professionals." (D. V. Feldman, CHOICE, Vol. 43 (1), September, 2005)

"The textbook under review provides a modern introduction to the theory of modular forms … . This ambitious program … is carried out in as down-to-earth a way as possible. … this is the first comprehensive introduction to the recent modularity theorem … . Written in a very comprehensible, detailed, lucid and instructive manner, this unique textbook is widely self-contained and perfectly suitable for self-study by beginners. Moreover, this book is an excellent guide to the relevant research literature … ." (Werner Kleinert, Zentralblatt MATH, Vol. 1062 (13), 2005)

"While there are many books on modular forms and elliptic curves, and some of them discuss the Eicheler-Shimura theory, most that describe it do not go deeply into the proofs. … The book of Diamond and Shurman addresses this need. … it is clearly directed to the serious student and it will unquestionably be a useful book even to experts. … this is a very unique and valuable book, and one that I would recommend to anyone wishing to learn about modular forms … ." (Daniel Bump, SIAM Review, Vol. 47 (4), 2005)

"This introduction to modular forms is aimed at students with only a basic knowledge of complex function theory. … A useful and up-to-date exposition of topics scattered throughout the literature, aided by exercises with answers." (Mathematika, Vol. 52, 2005)