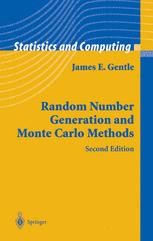 Monte Carlo simulation has become one of the most important tools in all fields of science. Simulation methodology relies on a good source of numbers that appear to be random. These "pseudorandom" numbers must pass statistical tests just as random samples would. Methods for producing pseudorandom numbers and transforming those numbers to simulate samples from various distributions are among the most important topics in statistical computing.

This book surveys techniques of random number generation and the use of random numbers in Monte Carlo simulation. The book covers basic principles, as well as newer methods such as parallel random number generation, nonlinear congruential generators, quasi Monte Carlo methods, and Markov chain Monte Carlo. The best methods for generating random variates from the standard distributions are presented, but also general techniques useful in more complicated models and in novel settings are described. The emphasis throughout the book is on practical methods that work well in current computing environments.

The book includes exercises and can be used as a test or supplementary text for various courses in modern statistics. It could serve as the primary test for a specialized course in statistical computing, or as a supplementary text for a course in computational statistics and other areas of modern statistics that rely on simulation. The book, which covers recent developments in the field, could also serve as a useful reference for practitioners. Although some familiarity with probability and statistics is assumed, the book is accessible to a broad audience.

"The second edition covers advances since the first edition appeared in 1998, so this second edition I seven more valuable than the first. This edition, like the first, is aimed at the graduate level and would be useful for a course on random numbers." Technometrics, May 2004

"This book is an excellent reference for statisticians who need to generate pseudorandom numbers (PRN.) Gnelte brings together the literature in a helpful step-by-step format and provides copious references for those who want or need to dig deeper." Journal of Statsitical Software, April 2005

"The book gives an extensive introduction into the field of random number generation, theory and practice and shows some examples of their usage. … contains a large bibliography, which is a valuable guide for further reading. The book is very useful for a practitioner … . The book could also be used in a course on random number generation … . All in all a book that people using Monte Carlo methods should have on their bookshelf." (dr. A. Hoogstrate, Kwantitatieve Methoden, Issue 72B24, 2004)

"I think this is a very good and useful book on the generation of random numbers and the use of Monte Carlo methods. It can be used as both, a reference and a textbook. It covers basic principles as well as newer methods such as parallel random number generation and Markov chain Monte Carlo. Also this book includes exercises which I find very use- and helpful in understanding this not so trivial field in computer mathematics." (Simulation News Europe (EUROSIM), Vol. 40, May, 2004)

"It has been stated and argued, to our minds convincingly, that ‘the future of science will belong to…simulation-based modeling’ … . it is encouraging that Gentle devotes Chapters 1,2,3, and 8 … to random number generation. … Much of the rest of the book is concerned with generating variates from other distributions … . the future of science belongs to the modeler who educates him- or herself on uniform random number generators. This book is an excellent place to start that education." (Edward J. Dudewicz, Mary A. Owuor, SIAM Reviews, Vol. 47 (4), 2005)

"This book is a remarkable treatise on the theory and practice of random number generation. … It allows the reader to understand the theoretical basis of each method and to implement it in a reliable manner. The writing is very precise but always easy to follow. Each chapter contains a host of theoretical and practical exercises. … The completeness of the book make it an essential reference, but parts of it can also be used as a text book." (Ricardo Maronna, Statistical Papers, Vol. 47, 2005)

"This edition incorporates discussion of many advances in the field of random number generation and Monte Carlo methods since the appearance of the first edition of this book in 1998. … There is a rather extensive list of references added at the end of the book. … The book is intended to be both a reference and a textbook. It can be used as the primary text or as a supplementary text for a variety of courses at the graduate or advanced undergraduate level." (Volker Schmidt, Metrika, Vol. 64, 2006)

"The book may be most appropriately described as a handbook for random number generation. … Each chapter has a set of exercises following it. The level of these make this book an ideal textbook for an undergraduate or introductory graduate course. … Readers new to the field of randomization will find Gentle’s book an excellent starting point for self study. A casual perusal of the book will be a good source of academic culture in this area of scientific pursuit." (Arnab Chakraborty, Sankhya, Vol. 65 (4), 2003)