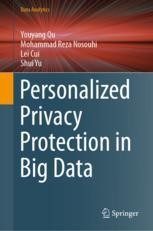 This book presents the data privacy protection which has been extensively applied in our current era of big data. However, research into big data privacy is still in its infancy.  Given the fact that existing protection methods can result in low data utility and unbalanced trade-offs, personalized privacy protection has become a rapidly expanding research topic.In this book, the authors explore emerging threats and existing privacy protection methods, and discuss in detail both the advantages and disadvantages of personalized privacy protection.  Traditional methods, such as differential privacy and cryptography, are discussed using a comparative and intersectional approach, and are contrasted with emerging methods like federated learning and generative adversarial nets.
The advances discussed cover various applications, e.g. cyber-physical systems, social networks, and location-based services. Given its scope, the book is of interest to scientists, policy-makers, researchers, and postgraduates alike.

Youyang Qu received his B.S. degree in Mechanical Automation in 2012 and M.S. degree in Software Engineering in 2015 from Beijing Institute of Technology, respectively. He received his Ph.D. degree in Information Technology at School of Information Technology, Deakin University, in 2019. His research interests focus on dealing with security and customizable privacy issues in blockchain, social networks, machine learning, and IoT. He has over 30 publications on top journals and magazines such as IEEE IOTJ, IEEE TII, and IEEE wireless communication. He is active in communication society and has served as TPC Member for IEEE flagship conferences including IEEE ICC and IEEE Globecom. He is also Publicity Chair of SPDE 2020.

Mohammad Reza Nosouhi received his M.S. degree in Telecommunications Engineering from Isfahan University of Technology, Iran, in 2014. He is currently pursuing his Ph.D. degree in Information Technology with the School of Software, University of Technology Sydney, Sydney, Australia. He joined the Commonwealth Scientific and Industrial Research Organisation (Data61 unit) in 2018 as Visiting Scholar. He has won Australian Post Graduate Award Scholarship, funded by the Australian Federal Government in January 2017. He has published a couple of papers in the area of data security and privacy. His research interests include data security and privacy, applied cryptography, and AI applications in security.

Lei Cui received his B.S. degree of Electrical and Power Engineering in 2010 and Ph.D. degree of Electronic Science and Technology in 2019 from Taiyuan University of Technology, respectively. He is currently pursuing his second Ph.D. degree with the School of Information Technology, Deakin University, Australia. His research interests focus on dealing with security and privacy issues in IoT, social networks, and machine learning.

Shui Yu is currently Full Professor of School of Computer Science, University of Technology Sydney, Australia. His research interest includes security and privacy, networking, big data, and mathematical modelling. He has published two monographs and edited two books, more than 200 technical papers, including top journals and top conferences, such as IEEE TPDS, TC, TIFS, TMC, TKDE, TETC, ToN, and INFOCOM. He initiated the research field of networking for big data in 2013. His h-index is 41. He actively serves his research communities in various roles. He is currently serving the editorial boards of IEEE Communications Surveys and Tutorials, IEEE Communications Magazine, IEEE Internet of Things Journal, IEEE Communications Letters, IEEE Access, and IEEE Transactions on Computational Social Systems. He has served many international conferences as Member of organizing committee, such as publication chair for IEEE Globecom 2015, IEEE INFOCOM 2016 and 2017, TPC chair for IEEE Big Data Service 2015, and General Chair for ACSW 2017. He is Final Voting Member for a few NSF China programs in 2017. He is Senior Member of IEEE, Member of AAAS and ACM, Vice Chair of Technical Committee on Big Data of IEEE Communication Society, and Distinguished Lecturer of IEEE Communication Society.