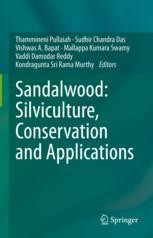 This book collects comprehensive information on taxonomy, morphology, distribution, wood anatomy, wood properties and uses. It also discusses silvicultural aspects, agroforestry, pests and diseases, biotechnology, molecular studies, biosynthesis of oil, conservation, trade and commerce of Sandal wood. Sandalwood (Santalum album L.) is considered as one of the world's most valuable commercial timber and is known globally for its heartwood and oil. The book brings together systematic representation of information with illustrations, thus an all-inclusive reference and field guide for foresters, botanists, researchers, farmers, traders and environmentalists.

Prof. T. Pullaiah is a former Professor in the Department of Botany at Sri Krishnadevaraya University, in Andhra Pradesh, India. He has held several positions at the University and was President of the Indian Botanical Society and of the Indian Association or Angiosperm Taxonomy. He holds a PhD from Andhra University, India, and was a Postdoctoral fellow at Moscow State University, Russia. He was awarded the Panchanan Maheshwari Gold Medal, the Dr. G. Panigrahi Memorial Lecture award of the Indian Botanical Society and the Prof. Y.D.Tyagi Gold Medal of the Indian Association for Angiosperm Taxonomy. He has authored 53 books, edited 20 books and published over 330 research papers. He was a member of the Species Survival Commission of the International Union for Conservation of Nature (IUCN).

Dr. Sudhir Chandra Das, Indian Forest Service, is a Forest Officer in West Bengal, India. He did his Masters in Agricultural Chemistry and Soil Science from Bidhan Chandra Krishi Viswavidyalaya and PhD from Burdwan University in Botany. He served as Divisional Forest Officer in Bankura (S & N) Division for more than 7 years and worked on Sandalwood. He has served 30 years in Bengal Forest Department in different capacities. He has written Management Plan cum Working Plan of Buxa Tiger Reserve for the period 1999 to 2009. Dr. Das has published 18 Articles in different Journals of National and International repute. The ‘Indian Forester’ Journal has awarded him the prestigious “Indian Forester Prize” for the best research paper in 2016 in the ‘Indian Forester’ titled “Effect of Host Plants on Growth and Survival of Santalum album in West Bengal.”

Dr. Vishwas A. Bapat has worked in Bhabha Atomic Research Centre, Mumbai, India as a scientist and post retirement, working in Shivaji University, Kolhapur, India, as Emeritus Scientist CSIR, later on as Senior Scientist INSA and is currently working as Honorary Scientist NASI, India. He has worked on basic and applied research which has paved way for the conceptual and practical developments in plant biotechnology mainly focused on micropropagation, secondary metabolites, transgenic plants and phytoremediation. He has published more than 250 research papers including several book chapters. He is a fellow of Maharashtra Academy of Sciences, India, Indian National Science Academy, India and National Academy of Sciences, India.

Dr. Mallappa Kumara Swamy is working as a Professor, Department of Biotechnology at East West First Grade College (Affiliated to Bangalore University), India. He has completed his Postdoctoral Research at the Department of Crop Science, Universiti Putra Malaysia from 2014-2018. Before that, he had worked as an Associate Professor and Head, Department of Biotechnology at Padmashree Institute of Management and Sciences, Bengaluru, India. He obtained his PhD (Biotechnology) from Acharya Nagarjuna University, India. He is having more than 17 years of teaching and research experience in the fields of plant biotechnology, microbiology, secondary metabolites production, phytochemistry, and biomedicine. To his credit, he has published more than 120 research publications in peer- reviewed journals and 32 book chapters in reputed book publishers. So far, he has edited 13 books with Springer Nature Singapore Pte Ltd., CRC Press, and Studium Press India Pvt Ltd. He is also serving as the Editorial board member and reviewer for few high impact journals.

Dr. V Damodara Reddy working as Associate Professor in the Department of Biochemistry, REVA University, Bangalore, India. Dr Reddy received Ph.D. from Sri Krishnadevaraya University, India. Dr Reddy worked as a postdoc in University of Louisville and University of Chicago, USA. His main area of research is ROS mediated liver pathogenesis under hypoxic conditions. Dr. Reddy's research work has been published in highly ranked peer-reviewed scientific journals, including PNAS (USA). He also served as a member for Institute for integrative Physiology, in University of Chicago. Dr. Reddy is a recipient of prestigious awards like Ramanujan fellowship and Young scientist from DST-SERB, India.

Dr. K. Sri Rama Murthy is working as Principal Scientist in the department of Research and Development, Shivashakti Biotechnologies Ltd,  Hyderabad, Telangana, India. He received M.Sc. degree from Acharya Nagarjuna University and PhD from Sri Krishnadevaraya University, Anantapur. He was awarded DST – SERC Young Scientist and also worked as Professor and Head, Department of Botany, Andhra Loyola College and Department of Biotechnology in Montessori Mahila Kalasala, Vijayawada. He was the Principal Investigator for 5 Major projects and completed successfully. Under his guidance 6 students were awarded PhD., and 7 M.Phil. Degrees. He has published more than 115 research papers including book chapters, 4 books and also filed 5 Indian patents.