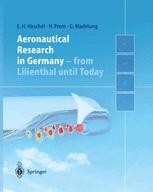 From Lilienthal until Today

From the pioneering glider flights of Otto Lilienthal (1891) to the advanced avionics of today’s Airbus, aeronautical research in Germany has been at the forefront of the birth and advancement of aeronautics. On the occasion of the centennial commemoration of the Wright Brother’s first powered flight (December 1903), this English–language edition of ‘Aeronautical Research in Germany’ recounts and celebrates the considerable contributions made in Germany to the invention and ongoing development of aircraft.

Featuring hundreds of historic photos and non-technical language, this comprehensive and scholarly account will interest historians, engineers, and, also, all serious airplane devotees. Through individual contributions by 35 aeronautical experts, it covers in fascinating detail the milestones of the first 100 years of aeronautical research in Germany, within the broader context of the scientific, political, and industrial milieus.

Important contributions of German aeronautical research to the flight sciences are, for example, the boundary-layer theory (1904), the lifting-wing theory (1918), the Wagner Web (1924), the boundary-layer stability theory (1929), the swept wing (1935) and its experimental verification (1939), the axial compressor (minimum frontal area) for jet engines (2nd half of the thirties), the transonic airfoil (1940), the area rule (1943), and the first application of a supercritical wing (Airbus A310, 1982).

This richly illustrated and authoritative volume constitutes a most timely and substantial overview of the crucial contributions to the foundations and advancement of aeronautics made by German scientists and engineers.